Feather your Nest Friday from the farmhouse.

Last weekend we were in the city tidying our house that is for sale, watering and mowing the lawn etc.  Each time we find some last things to bring back with us.  We also came home with more plants for the garden and a lot of these were things from my old garden and family and friends.  I had seven Lambs Ears plants with nice little root systems in a container of water... 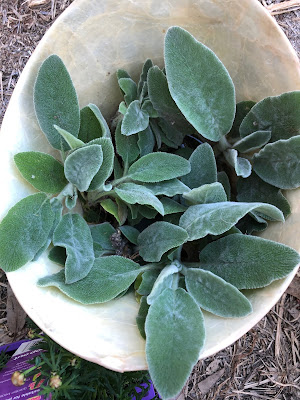 I was so pleased with these!  I also had some plants from the nursery including some beautiful Lavenders... 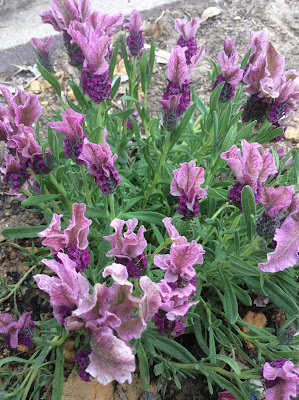 Also lots of herbs and veggies!  Finally I started my herb and kitchen garden.   This area was the worst of the garden, a mess.   We have a deck leading into the entrance and kitchen which is a kind of U shape.  When we came here this was basically full of rubbish.   Now it is becoming the kitchen garden.  Most things are tiny but I have a lot started! 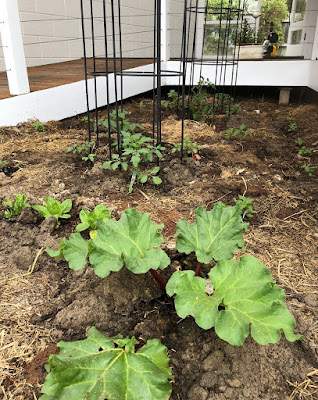 As soon as we got home I started planting and kept going most of the next day.  Since then it has rained twice which has helped a lot. Things all look really good.
Up the hill from the house there is a shearing shed.  I have started pushing the wheel barrow up the hill and filling it with sheep manure.   This is a daily job now.   The first day I filled the barrow right up but then when I went to move it I realised it was too heavy to push.  I had to reduce the load somewhat.   Still when I got it home Andy was amazed I could push that so far as it was heavy for him!  The next day I about halved the size of my load!   But it is still a lot and it is rich dark compost/manure for the garden.   At the nursery one small bag of this stuff is $10.
In the chook shed there was a great pile of dried up chicken manure as well.  So I took my metal bucket up with me and a spade and filled that.  This bucket is now known as the poo bucket lol.
So all this went on to the veggie and herb patch.  Like anything doing a bit each day soon adds up!

Last week I had spent hours cleaning the oven.  This week I had another go and used the steam cleaner on it as well.  Finally I think it is clean.  In fact it really looks brand new!  It sparkles!

By Tuesday I had nothing left to plant and nothing to unpack.... plus a clean oven!  So I began to bake again!
The very first thing I made was an old fashioned Sultana Cake for Dad.  I had told him this would be the first thing I cook in this oven.  First I have had to print out a chart to convert Celsius back to Fahrenheit as the oven being old is still in the old measurements.   Andy printed this out for me and I stuck it inside my cupboard closest to the stove.  Anything I need to look at often I print and stick inside a cupboard door...   I always remember that Laine kept her most often used recipes inside the cupboard doors.  You don't have to look for them you just open the door!

The oven is wonderful.  This cake was cooked on very low for two hours.  It worked out perfectly... 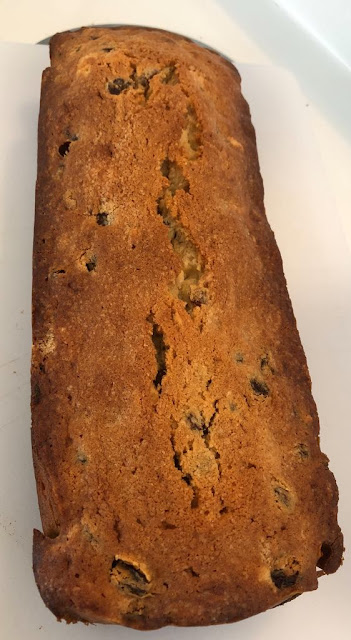 Before we moved I had baked six fruit cakes.  These cakes have been so so useful.  Everyone who has helped or worked here I have offered a slice and a tea or coffee.  I have used a lot of that cake.  Always I wish I could have some but never do.   So this week I made up the same recipe using gluten free flour.

They worked out just fine and you wouldn't even know the difference. 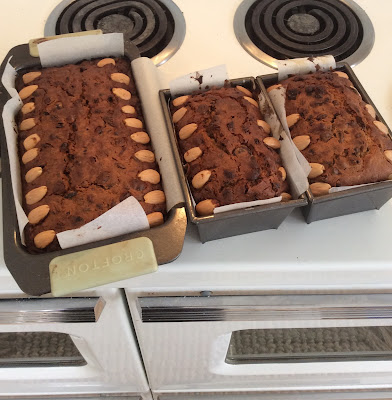 Luckily these keep a long time (like a year) as I have a big supply.  But it is so nice! 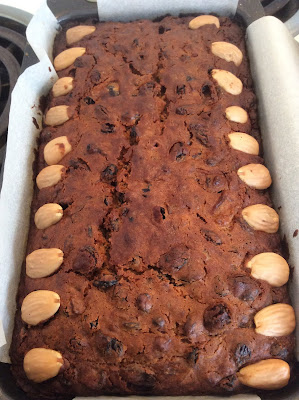 My Vax stick vac wasn't working properly.  I know how to clean all the filters etc and still no... so we had it repaired.  Now it is as good as new for a fraction of the price of a new one.

On the way to Chloe's I found this gorgeous bush of flowers... 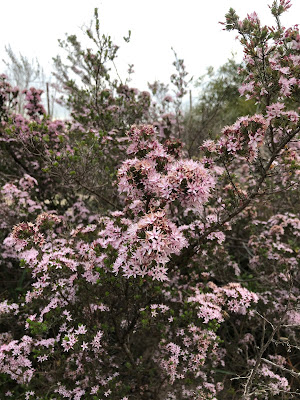 I picked armfuls and used a big bucket as a vase.    When I was picking these a little Echidna walked past!  I really wanted a good photo but he just hid his face in the sand each time so I gave up on that. 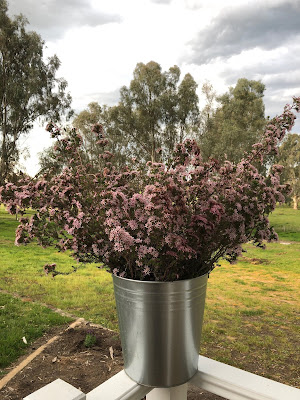 Andy achieved a lot. He pressure cleaned the back courtyard. This had been filthy.  Now it looks so good.   He got sprinklers and played with water lines and pumps so now we have good pressure and can have sprinklers running on the lawn right around the house.   In the heat or summer or if there was a fire we can drench things fast.

Chloe gave me a chicken feeder. You can hang it up and mice or rats can't get the feed but the chooks can.  This is a win win!

Before we moved I was influenced by Lynette to get a pie maker.  I wondered why anyone would buy one when you can just make pies in any dish in the oven and I very often do.  I even joined a pie maker Facebook group!  Soon I was converted due to really small amounts of left overs can become a meal when maybe you wouldn't normally feel bothered to turn on the oven to bake one tiny pie.  And I can now have a tray of pies cooked before I could even have had the oven pre warmed.   So I moved here with my trusty K mart pie maker ready to go.
This week I made a beef casserole in the slow cooker.   We had this with rice that night.
Then I thickened the left overs with gravy and used it to make beef and veggie pies.   The next day I made a dozen of these and placed them on a tray for Chloe and Luke.  I slightly under browned them so when Chloe re heated them they would finish off nicely. 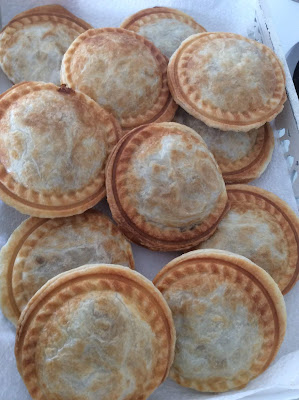 Chloe was really pleased.  Later that night I got a message from Luke.... "yummy pies, keep them coming!"  So I guess he liked them!

Then I went to make the rest up for us.  I tried Maggie Beer's Gluten Free Pastry recipe.  At first I was doubtful.  But it worked out so well and was delicious.  Like the cake I would not have ever guessed it was not ordinary pastry.

This was before it was wrapped in the fridge. 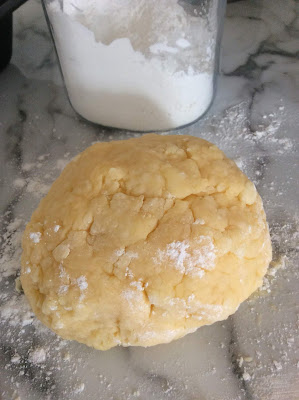 After it was cold and kneaded again it was smooth as silk and rolled out perfectly.  Winner!  I got another 15 pies made!
I noticed in the bakery pies were $5 to $5.50 each.  That is $135 in pies!   So I love this pie maker and next week it will be chicken pies then bacon and egg and so on with whatever left overs might be lurking.

I have to show you... this is a Grey Shrike Thrush on Mum and Dad's back veranda.  I can't wait to see the babies! 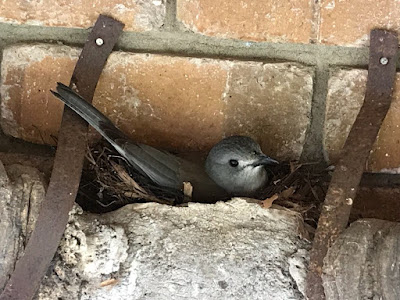 This bird is very friendly and sings all day.  So lovely!

Lastly I made a carrot cake for the girls as we are heading back to Adelaide again today.  I keep a big tin of cake related things.  I found some little icing roses and sparkles to make it look sweet as Harper is cake mad.  So this is on a tray for the trip. 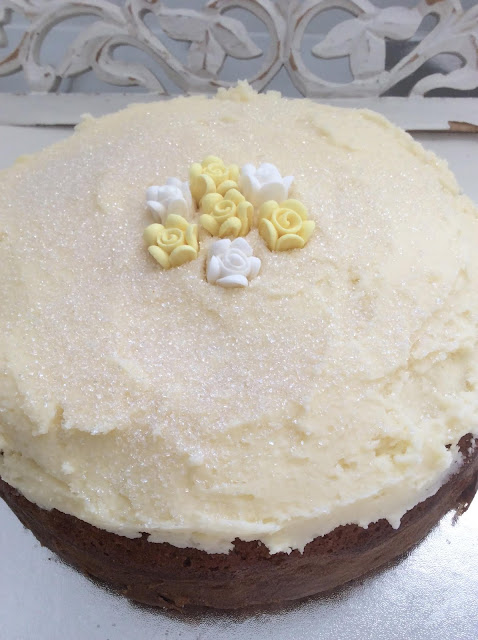 I loved this week as it was a bit more like normal life.  We are fairly settled in.  I started baking.  My day is developing a routine.  I mix up the day so that I do the heavy exercise parts mixed with quieter parts and I take tea breaks and a lunch break.  If we treat our work like a paid job and take our breaks we really get so much more done.  Mid afternoon I often feel really tired.  A half hour break, a cup of tea and then I feel ok well I can just get this, this and this done before I start on dinner...
I know each day I am getting fitter and stronger!  If health is part of preparedness this all is very good.

We are now ONE WEEK until the wedding!  I am praying for a reasonable day weather wise.  We have a very busy week coming up and much of it will be wedding related.  It is so exciting.   The little girls are beside themselves counting down the days.