It has been a good week. We were really lucky with mild days which helps a lot.

Some of the ways I feathered our nest this week include:

I used my $40 Flybuy points to pay for the groceries and mainly used it on specials so it stretched a long way.
Then I sat and stuck the next weeks vouchers into my diary. Basically there is one a week that if you get it scanned you get lots of extra points. It is just keeping track of them and being organised that pays off. So they are in my planner then I stick them to my shopping list each week before I go shopping. It is like a lot of things... a few minutes invested end up paying off later.

We had a meal using the Pesto I made and so did Lucy. This is what she made... Pesto Chicken! 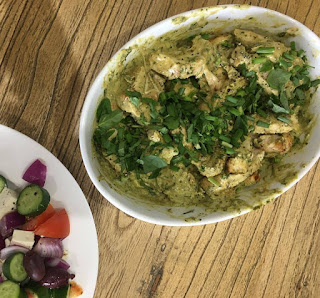 Basically she cooks some chicken breast, mixes the pesto with cream in the frypan and pours this over the top.  Well, I thought it looks pretty good and will do this with my next lot.  Or make a pesto pizza...

I picked more peaches. I think about 12 kilos. 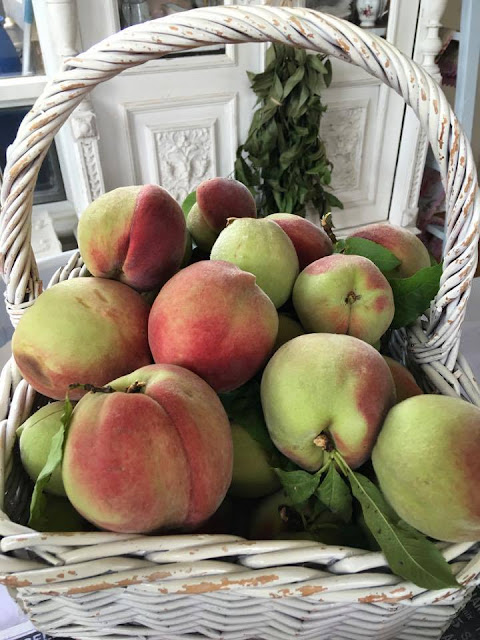 We have been eating them fresh but now they are ganging up on us and need using faster.  In the spirit of using things up I gathered ingredients to make a crumble...

I had cereal from when we stayed in a motel plus plain biscuits they gave us each day too, a box of muesli I was given that was rejected by someone else, a jar of random fruit and nuts... 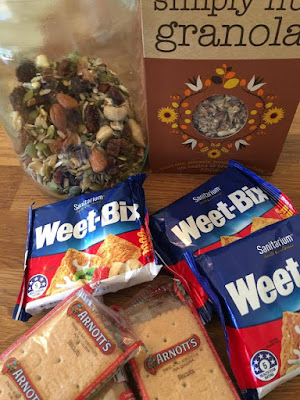 The bits that needed crushing up I just put in a big snap lock bag and belted them senseless with the rolling pin. Then I added butter, flour, brown sugar and cinnamon. I just taste it and if it tastes good then its ready!

Now I have a huge bowl of crumble ready in the fridge.
Wednesday night I made my first crumbles.  The peach version is beautiful. I am pretty sure it was Lana who got me started on that. 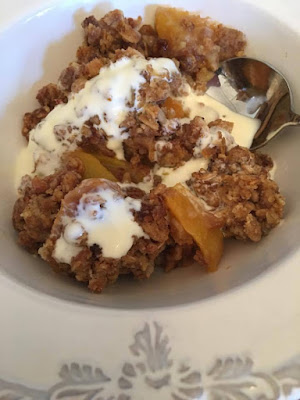 I will be making a lot of these in the next week and freezing them.

This week I made two trays of scrolls. I have been asked for the recipe so here goes...
I use sour dough starter. So in the morning I wake up my starter for an hour or two. Then I make my sponge from at least  a cup of starter, a cup of flour and a cup of water.  Stir and let that sit until its lovely and bubbly.
When bubbly I add a good splash of olive oil, a pinch of salt, a small spoon of honey and about three cups of flour and knead. I put it in the mixer and let it go. I reserve some flour as there is never the same amount of starter. But you don't want it to be too soft.  I followed a blog called Gully Grove to get going with sour dough and this is based on her recipe. It works so I just stick to it for everything from rolls to focaccia etc.
When nice and stretchy I sit it, covered,  for most of the day to rise.

A couple of hours before I need the scrolls I roll out the dough in a long piece like this: 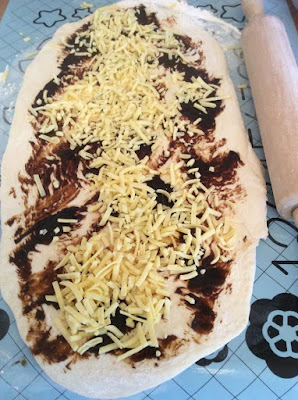 Then I cover it in my filling which was vegemite and cheese (above). The Aussie girls will know about Vegemite and boy is that hard to explain. It is a bit salty, savoury spread. There is a bakery that makes them and they are really massively popular. I need to check on the prices they are charging!

The other one I did was bacon and cheese... 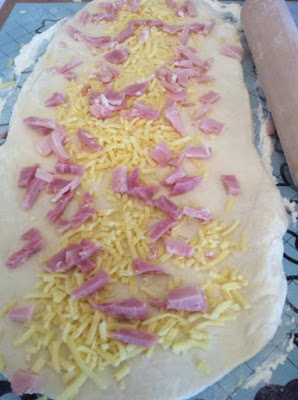 You could use some cooked onion, tomato base and make them pizza scrolls... etc.

Then roll them up in a long tube and cut into 12. 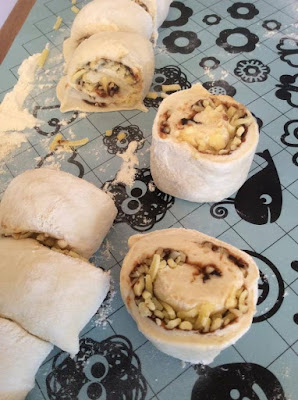 Twelve fit into my biggest baking pan which I line with baking paper.
They look sparce at first... 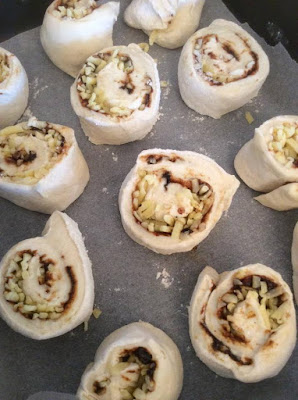 Then I cover them and let them rise again.... and then they bulk up nicely. 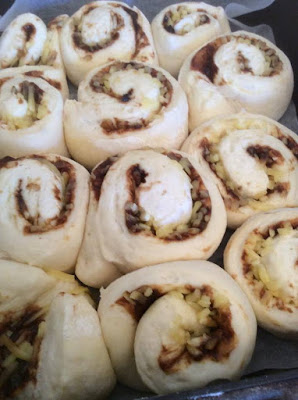 I have to say sour dough starter rises better for me than dry yeast ever did. Also with a starter you never need to buy yeast again.

I brush or drizzle them with butter and bake them for about half an hour.

These make great lunch box fillers. Mobile breakfasts. Serve with soup for a meal. Good for using up left overs! And what I love the most if I have these it is much faster than filling sandwiches or rolls as they are already filled.   On busy mornings this is a big help.
They are really easy and as far as I can see you can use any bread dough recipe. If I had a bread maker I would just start bread and get it out before it gets to the cooking stage, roll and fill.

They freeze well and I just microwave or put them in the oven and they are like fresh. 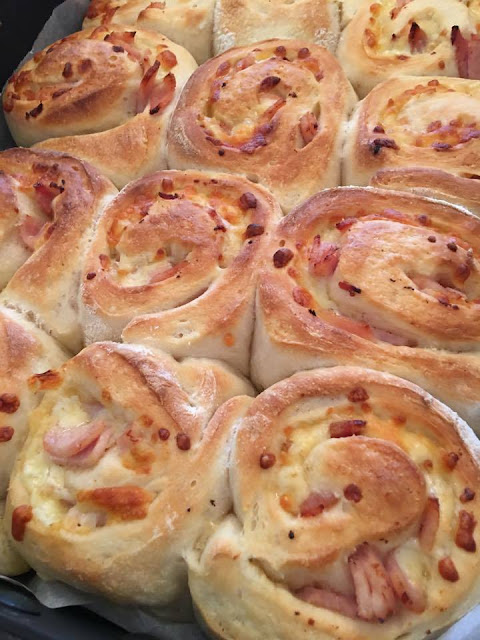 You could do wholemeal, grain, sprinkle with sesame seeds or basically anything you like.

I altered two tops so I can wear them more often.

I made Lucy a birthday cake.  While I was at it I doubled the recipe and this gave us a cake as well.

Andy trimmed the hedge and serviced my bike. I told him (after looking up the prices) that he just saved us $219.  As usual he was amazed but happy!

My Vicky Challenge:
The weeks lunches $100.
The fishing trip food and drinks $50
My two tops $25.
Two cakes $40.
Two dozen scrolls at $3 each $70
The hedge $120
The bike service $99 (yes really this is what the stores are charging for the most basic service)
12 kilos free peaches $48
Being the end of the month I add in my hair savings (from doing my own cut, colour, treatments etc) $220
And the same from doing my own pedicure and manicures. $160.

So this made it a big week and I wrote $932 into my savings book! The best week so far!