This week we are looking at inexpensive or free Christmas ideas.  This is not to say there is anything wrong with spending on Christmas rather to say that if money is tight you can still celebrate.  It can be a real crisis for a family to feel they cannot give their children a wonderful Christmas due to financial stress.  While I think it is much harder with teenagers little kids do not know what costs money and things are magical to them no questions asked! 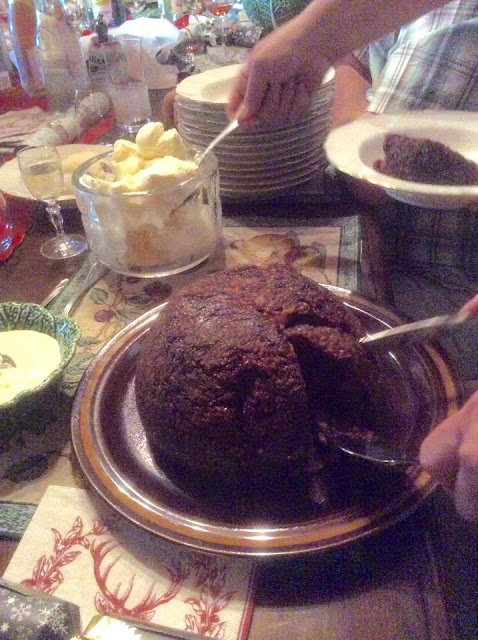 The photos in this post are from our farm Christmas.

To get us started lets think about years ago when Christmas was just a wonderful time and it did not mean maxing out the credit card at the mall!

Vicky went to visit Ida and asked her about Christmas when she was in her children were small. So we are travelling back eighty years or so...

A Simple Christmas with Ida:

Ida being very young herself had a childish joy about the season that went beyond material things. She was mature enough to understand that times were hard and that her and her husband wouldn't be participating in any lavish celebrations since money was so very hard to come buy and had to be used wisely.
Ida learned very on to hoard away part of what they could get since waiting until the last minute never really seemed to be her style. Back then everything had value and could be used, even something as simple as the string. So she kept everything and always looked for things that others threw away. String and bottles and paper or broken things that were discarded. She thought she could make something with these things.
She had a small amount of things that she had collected and decided that they would celebrate!
So she had her husband cut a very small tree because they had such a small home and she had him break the bottles gently so she could take some of the pieces and tie them with string to put on her little tree. She cut paper stars from butcher paper that she straightened out and hung those from string by her little table.
A local church took donations for the poor so she went there to see what she could find for her little family and proudly walked away with a wool coat that was full of holes, a sheet that was really threadbare and 1 roller skate. Intending on having a wonderful holiday she took her treasures home and made her husband a pair of wool liners for his holey boots, her little girl a doll from the old sheet and for her son they took the roller skate and her husband made him a truck out of it. All handmade and all special.
Ida's little family had pancakes for Christmas dinner with sugar on them. That was a big treat. She said sugar wasn't expensive, but since they didn't have much money she saved hers for special occasions or for jam making. Ida and her husband enjoyed each other's company immensely and decided that Christmas would always be a holiday where they would just enjoy each other so they ended their little celebration with a walk in the snow. And a new baby 9 months later!
XOXO
Vicky 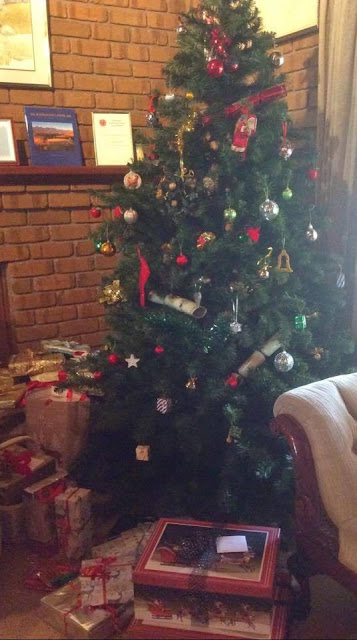 I know that when Dad was little he played farmer with sticks to make cattle yards, walnut shells were cows and knuckle bones were sheep. He played for hours with his farm animals. So I know the truck made from the roller skate was probably loved!

The girls tell me that highlights of Christmas included looking at the lights on the houses. On Christmas Eve it was our tradition to have a late night and drive around with Christmas music playing to look at everyones lights and decorations. In Australia Christmas is in summer and so it is a little later before it is dark enough for all the lights to come on. When they were little they were asleep before the end of this and I would lift them out of the car and they would wake up on Christmas morning!  Later on it served to make them sleepy and drift off to sleep happily.

Another thing they loved is having supper under the Christmas tree. They would bring their pillows out and make a nest under the tree and the twinkly lights and have a cup of "tea" (milk) and a biscuit and be in this little magical world. Reading a story next to the tree was another.

Going to an event with carols was wonderful. The town always had a carols night. Sometimes we went with our church on a bus and sang carols outside of peoples houses that could not get out to such events. This was so much fun and you really felt the emotions of Christmas!

We always left Santa a snack and a note. Usually it was a glass of milk and cookies. Santa was a fairly messy eater as there were always a lot of crumbs and an empty glass. We figured this was because he was in a pretty big hurry. 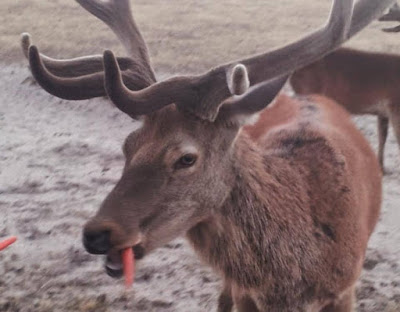 As there are deer at the farm I gave a friend a deer antler and she put it in her front yard late on Christmas Eve. Her little boy found it on Christmas morning!  This was substantial proof that one of the reindeers had dropped it when they were on the roof. You have to love scientific thinking. My friend told me this was just wonderful!

Some of the other free or almost free ideas are to sneakily decorate your neighbours letter boxes with tinsel.
Decorating biscuits, gingerbread men etc.
Making paper decorations, stars and garlands.
Playing Christmas music and decorating the house and the tree. When I was little putting up the Christmas tree was so exciting. Putting the angle on top was the best thing for me I think out of everything!
Making a nativity scene. Every year we did this at school starting with a cardboard box. I loved this!
Acts of kindness especially for Christmas. 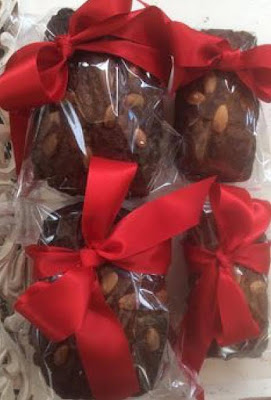 Setting the table beautifully and using your best things!
Making things sparkle with lights and candles. Creating a magical atmosphere really sets the scene!
You can really up the excitement Christmas Eve. NASA has a Santa tracker and you can watch which country Santa is delivering to and his progress!  I still watch this myself haha!

Even now it is the lights, carols and finding ways to make someones Christmas special that do it for me. Plotting a surprise. Doing something special that no one expects.  Helping someone you don't even know.  These are the things that give me that special feeling of Christmas. Money doesn't buy any of this anyway.

If you have unused decorations or a tree set it up for someone who doesn't have one. I decorate Kath's room at the nursing home. It takes very little time and she just loves it!  Already I have been asked when am I coming and am I bringing a tree?  Yes I am. It is like one foot high but it is a tree!

Make a hamper of cooking for someone you think might be alone for Christmas or a family that could use it.

Start a tradition like reading Christmas stories at bedtime or having a family story next to the Christmas tree. These are the things that wonderful childhood memories are made of!

Now over to you. What are your best memories of Christmas as a child? How can we make Christmas wonderful that doesn't involve a lot of money?
I would love to hear your Christmas stories. I have not experienced a white Christmas! Usually it is hot here!
We have been making gifts, we will be cooking and wrapping. Now lets see if we can add those magical touches!  We are almost exactly one month to Christmas Eve!

Email ThisBlogThis!Share to TwitterShare to FacebookShare to Pinterest
Labels: The Christmas Challenge.