Pantries and Preparedness. Be ever watchful.

Of all the wonderful blogs I follow and helpful information I come across nothing has as good advice on preparedness and prudence as my Bible. I am continuously amazed.
This has been hitting home with me lately more than ever.
There are so many preparedness gems, some I have mentioned already, like the Proverbs woman not being afraid of the winter as she is prepared!!
Also I look at a woman looking well to the ways of her household to totally include being sensible and prepared.

But a theme mentioned many times is being watchful. Being sober and watchful. It is another thing that has layers like an onion! Being watchful includes many levels including things like are we on the right track? Are we being deceived? Are we keeping our priorities straight? A whole list of things that we need to be continually watchful about.

How does this help us with preparedness?

In many ways! We already talk about being watchful with the price cycles of groceries, of sales and mark downs, of opportunities to stock up and build up the pantry. Wendy posts once a week the best specials in the catalogues! (she just has today in fact) This is being watchful. This helps us manage our budgets and get good food on the table.

I have talked about knowing every lemon tree in a ten mile radius! lol. I probably do! But being aware of all the things available to us is being watchful. We are watching for opportunities. Picking things in the right season is being watchful so that we don't miss the perfect moment to strike!

When we need to make a big purchase like a new fridge and we know when there is a big sale, that is being watchful.

But the other day I had a moment that was an eye opener. Chloe and I went into the city. We pulled up at traffic lights and before us a scene unfolded and it was like slow motion where you are just amazed and frozen. The traffic in front of us just had the go ahead to turn right. And at that moment there was a girl... she had ear phones on and was holding her phone up in front of her face and she walked straight in front of the wall of cars coming right at her! She took seven or eight steps out right into the middle. Cars were honking, slamming on breaks.... and she never knew. No idea. When a cars bumper bar was right up next to her she looked up. She had no idea where she was. She saw and heard nothing. It was such a close call and her survival was all thanks to the drivers.  We were gobsmacked.
When I told Andy this he said he sees this every day. They don't know where they are. They don't look up. They are in a total world of their own. If someone is shouting at them they don't know, if a dog is barking at them they don't know... and what easy targets.

So this is about as far from watchful as you can get! To not know your surroundings, be able to hear a warning, be alert... and I thought about this. I wonder if that girl would know much of world events, if it is going to be a storm tomorrow?   I just thought about awareness and how our safety depends on it on so many levels!

I read a while ago that in self defence one of the biggest things we can do is have "situational awareness."  Police and military are trained in it. The basics of it are just sensible. To know what is going on around us. To be alert and observe. To notice. These things are actually skills. And they can save our lives.  Even the most simple thing like being aware it is late and dark so don't walk through the park is situational awareness!  This is a really interesting subject and you can increase your skills in this and become watchful and observant. This really can be a life saver. It is a really interesting subject and there are easy ways to improve your skills.

Not everything of course is something we can see coming. But many things can be seen coming! We have a great advantage that now there might be several days warning that a cyclone or terrible weather event is coming. This is an advantage but only if we know about it!  When cyclone Tracy destroyed Darwin it was observed that all the birds left and went inland. Some people would have observed that. Probably many never noticed. But before weather warnings and satellites that's all people had, signs in nature that something was coming.

Making sure we hear and see warnings is a major help in preparedness. Having an action plan for those times is a huge help. Debbie said the other day that they had no power for three days and that candles, batteries etc sold out of the stores. She was affected by the massive storms over Sydney and NSW. This was forecast so there was some warning. Debbie had gas to cook with, a good pantry and everything they needed. People were killed driving through water over roads. And it has happened again since too. In this situation following the warnings, heeding advice (not to drive through water) having candles, torches and food in the house were all life saving things.

Andy had to go early in the Adelaide Hills over the weekend. I was able to tell him there was a traffic warning about fog and ice. These things make a difference! Warnings are helpful. They save lives.
If there is a storm coming do you know about it?
If you are travelling do you know the dangers of where you are going? The different laws? The different health risks?
If a product is being recalled because of health risks or contamination would you know?
If the power goes out can you still follow the government advice in an emergency? And follow updates?
Having some warning where it is available is worth a lot. A little time to take action can make the hugest difference.

I know ignorance can be bliss at times. But it is risky!

The bigger picture of being watchful is what is going on in the world. I always used to ask the girls why were the three wise men wise? Why were they called the three wise men? They were wise becasue the knew when they saw a new star over Bethlehem that Jesus was going to be born. HOW did they know this? Because they knew their scripture!

Lately I am amazed bu the things happeneing in the world that I have been reading about all my life thinking oh that probably won't happen in my life time. And many things are happening! I wouldn't know what was going on at all if I didn't know my scripture.

Do not be like the headphone girl and walk straight into trouble.
"the prudent see danger and take refuge, but the simple keep going and pay the penalty." Prov 27.12
'

How can we use the advantages we have to be aware of what is happening? Many places have alerts you can sign up for. Our state sends texts in extreme emergencies. But there are many ways of keeping an eye on things that we could consider taking advantage of.
How can we be more watchful and use this for our families safety and also for gathering the things we need, saving money and doing well?

My little progress report is i have been stocking up on matches, batteries and candles due to what Debbie said last week.  (thanks Debbie)  These things sold out in the stores. I thought I would add to my supplies! Also I realised that a torch next to the cellar door might be a wise move since it is pitch black down there when there is no power! So I added a torch to keep right there at all times. 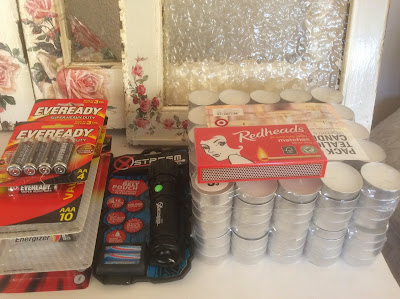 When I use candles or tea lights I pop them inside jars. I feel much safer with them this way and I am mentioning it as several people have said something about candles and safety. We have a battery lantern that gives out a lot of light as well. 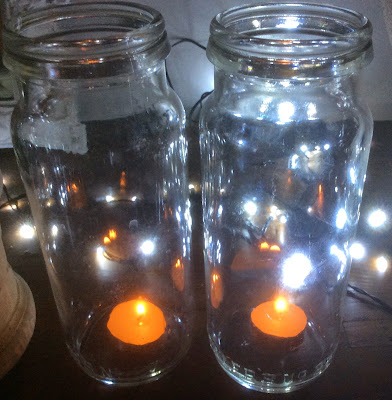