Preparedness and pantries. What will be worth more than gold?

Normally I would write my pantry post on Wednesday. This week I am writing it early in case any of the Australian ladies are wanting to buy powdered milk...  On Wednesday I will post my normal Monday blog post, so we are just around the wrong way this week!

In a recent pantry post Mel told the story of her Grandmother who responded to advice from her Mother in Law about the goods that were most in shortage and greatly sought after in WW1. This wonderful woman listened to this advice and acted on it. She lined the drawers in her home with packets of soaps and she stockpiled fabrics and sugar. And when WW2 came she had the ability to barter and use a great supply from which she made sweets and clothes as well. What a brilliant woman! She just got busy building up her nest and preparing for the future! 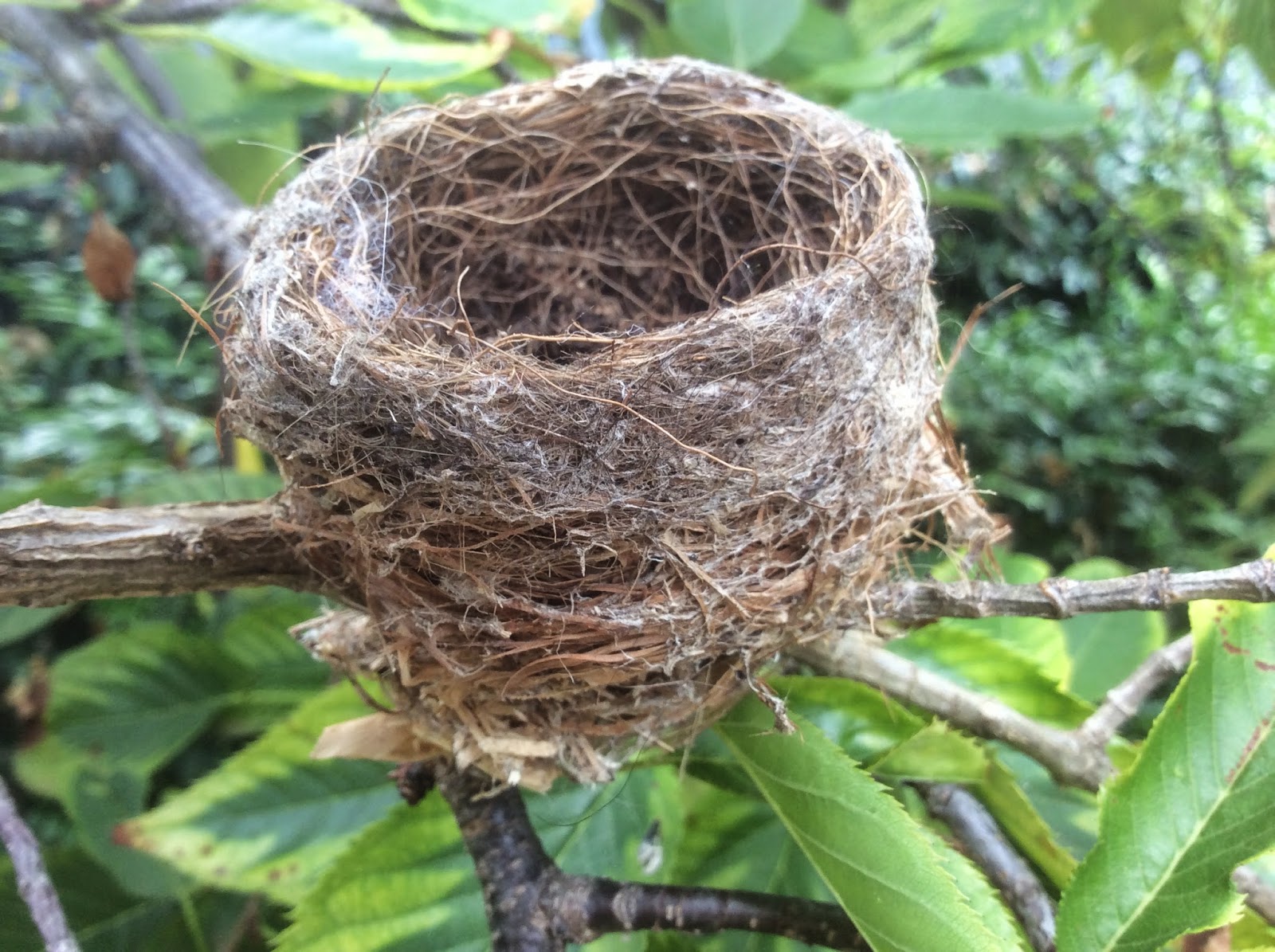 This got me thinking about what in our world could become short on supply and valuable?  In a shortage usually the price goes up and things that were once common place become greatly sought after and expensive. So they would also make great things to barter with.

We have discussed already the things that fly off the shelves in disasters that are good to have. On this I was thinking how could I be like Mel's Grandmother and store something that will be a bit like bars of gold in the bottom of drawers?  It's an interesting subject!

This led me to some amazing discoveries. In fact my mind boggles!

I noticed on Wendys blog My Abundant Life someone was commenting about the shortage of powdered milk interstate. Then I saw others commenting on this. Now a bit over a week ago there was powdered milk here on the shelves as I bought some. But I recalled last year for some reason there were shortages of baby formula and I didn't know why. It was on the news and there was a hotline to call. But we had no one in the family needing baby formula and I really didn't take much notice.

Last Thursday I went looking for milk powder and the shelves were empty. All empty, every brand and Coles and Woolworths the same. 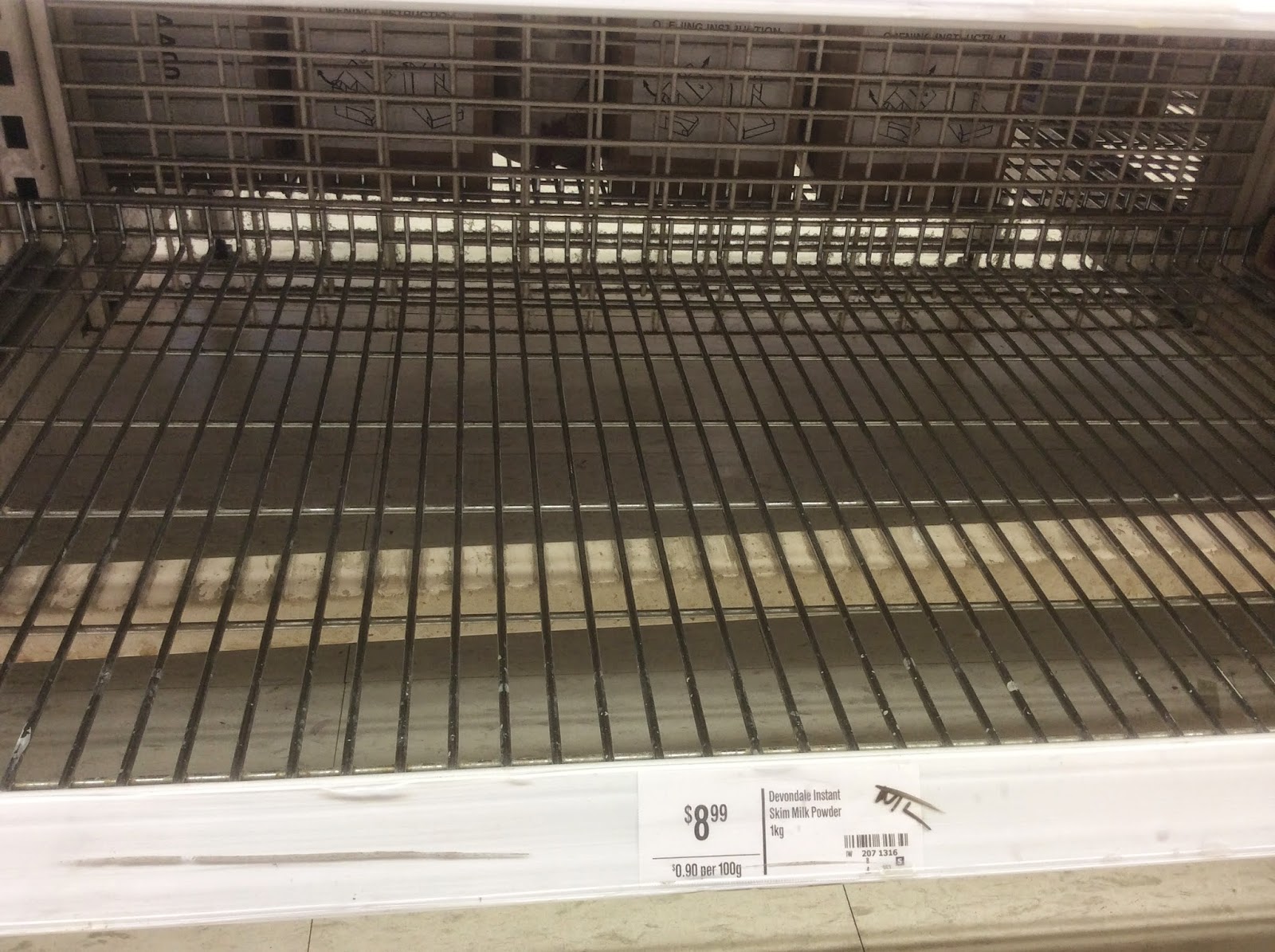 I learned that China in recent years has had health scares with infant formula. More than scares, they have had contamination and babies have died and thousands of babies hospitalised. Multiple problems and over time and the Chinese have come to want baby formula from other countries and I can see why. It began that those with relatives overseas (ie Chinese students  studying abroad) started to buy and send home baby formula. This escalated to baby formula becoming a commodity everyone wanted and worth a high price. And this has continued until now. Baby formula and powdered milk are called White Gold in many countries and half a dozen countries have experienced shortages. To top if off China also have had a shortage of fresh milk and one way to fill the gaps has been importing huge amounts of powdered milk from New Zealand. Now if I was a Mother in China needing powdered milk/infant formula I would be doing the exact same thing. So I am not being critical of what has happened just reporting it as best I can.

Australia and NZ are seen as clean and green countries free of contamination so are especially popular as sources of baby milk and powdered milk. And cans of formula have flown off the shelves. In both countries mostly now stores will not allow you to buy more than four tins. This is to try and preserve supplies for locals needing formula. I checked in my two local stores and indeed if you went to the counter with 5 tins you wouldn't be allowed to buy them. And I had heard nothing about this before.

(On top of all this we had our own contamination scare and some brands were removed from shelves sometime last year).

Some countries like Hong Kong have restrictions on how much baby formula you can leave the country with. (2 cans) They have even decreased luggage allowances on trains to stop the smuggling of white gold! In 2013 baby formula became hard to get in Europe and families there had to stockpile it when they could for fear of not being able to get any at all. In Algeria there is an actual black market in "white gold".

Ebay is full of baby formula being re sold as people make money of out of the situation. Much of the formula on ebay seems to be from the US so I am thinking there is not a shortage there... but I don't know this yet.

So... why is ordinary powdered milk unavailable? Is it related to the baby formula issue?
I decided to ring Devondale the main supplier of powdered milk in Australia. This call was very educational!

They said the amount of milk powder selling from the shelves is unprecedented. They cannot keep up which is why shelves are empty. They are trying to increase production but the man I spoke to said that in truth they cannot produce as much as is being sold currently, let alone if demand increases any further.

I asked was this related to the baby formula issue and China and he said yes. That there is a general shortage and huge demand for both. And it isn't an issue he could see going away.

Considering there are over a billion Chinese you can see how a country like ours with one sixtieth the population trying to contribute to their shortage is going to be a problem. And it could get worse! This shows to me how contamination, shortages etc can implicate the whole world!

Now, baby formula has a shelf life of a year or so. So it is not suitable for long term storage and the same for powdered milk. I am not sure how long powdered milk will really last? But this is worth keeping an eye on if a baby in your family is needing formula. And grab powedered milk when you see it if you use it.

The other two shortages that seem likely are chocolate and honey. There seems a general agreement that world consumption of chocolate combined with drought and Ebola etc in Africa equal higher prices and shortages predicted.

Honey is similar. Manuka honey in particular is only produced in NZ and Australia and is being hailed world wide as a medical miracle and beauty miracle. Everyone wants it. The prices are already very high. A shortage of this seems likely also. So I checked into Manuka Honey. Is it a trendy thing? or does it really have special properties? I think it does have special healing properties but I wil leave that up to you to decide. Lots of "honey" on shelves contains no honey at all and is just concoctions of sugar syrups and who knows what. But real raw honey is gone up and up in price.

Of the things I can see there is a likely shortage honey seems to be a good thing to store as it never goes off. Pure honey really lasts forever.

I decided to make this post today instead of Wednesday for anyone who uses powdered milk or has a child on formula. Formula is currently on the shelves as long as you don't buy multiples. But I would keep an eye on supplies just in case. And if you buy powdered milk watch for it as it may be on the shelf if your supermarkert has some come in but it is unlikely to last. (in Australia anyway)

I found this very interesting as there is nothing in the media but I found some mentions in the media last year. Perhaps they think if they tell people then it will only be worse?!

Wherever you live it can be a good idea to be up to date on shortages, contaminations and droughts etc which can cause things to be scarce and stock up on them if they are important to you. And sometimes these thing have the potential be be a good little investment for the future. In some cases buying before great price hikes is just a good saving.

So these days knowing what would be wise to stock up on as Mel's Grandmother did is possibly tricky. And we have to make our own judgements and do our own research... plus where will live may make a difference. But I am thinking I will stock up on pure raw honey and Manuka honey, at least. Also what to stock up on depends on our own needs as well as the needs of others and if you intend things to be an investment/safety net, gifts, or for personal use. But it is a very interesting subject. And a demonstration that a shortage in one country can have a domino effect on others.

Later this year if Lucy needs baby formula (She hopes not to but you never know...) then I will be keeping some spares on hand and watching the situation carefully. I would not have even known I NEEDED to do that.

Knowledge is power! I think of the Proverbs woman who is not afraid of the future. She brought home food from far away places, worked on building up her household and was like the bees and ants working away and storing things up. I think that's why I love birds and bird nests so much... they are happily working away on their nests creating a thing of beauty. That is so sweet to me! 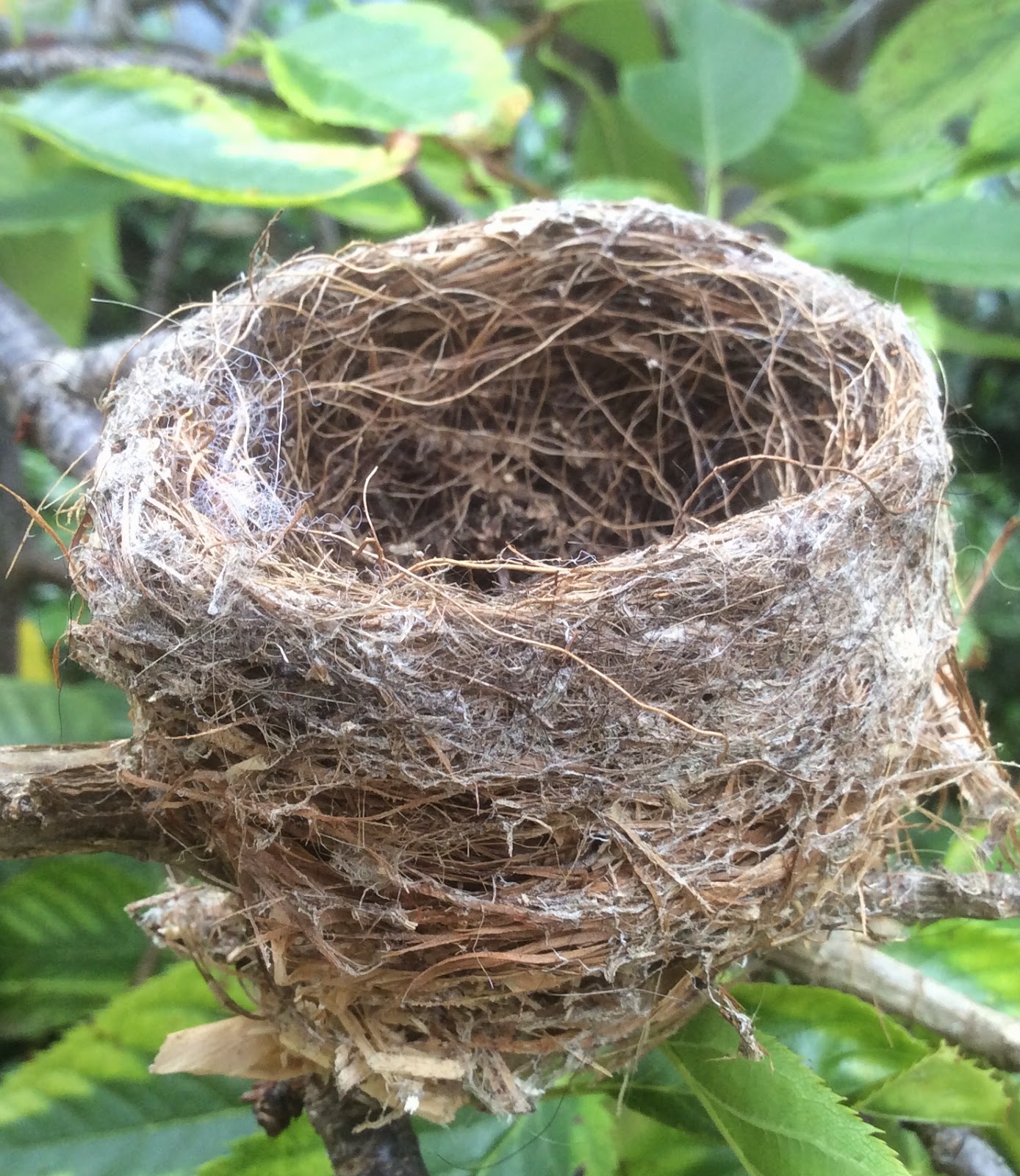 Next week we will return to normal days and I will hand back over to Helen. She has been working like a little bee on her pantry and preparedness!