Last week I had a very interesting week. 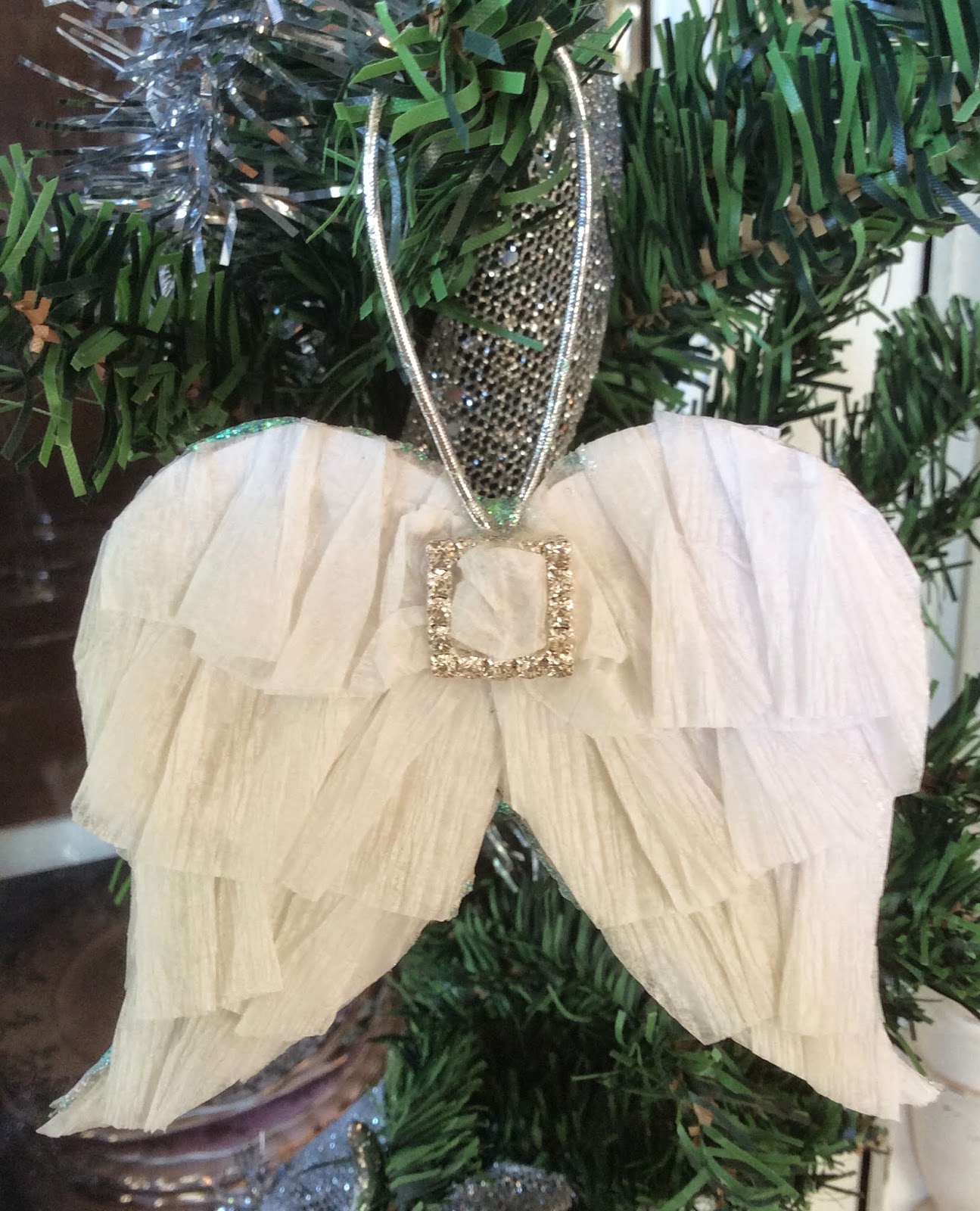 I had found the news of the world very hard to cope with. Not just last week but for several months. It was really bothering me and the plight of Christians world wide just seemed to be dismal.
I read one of my favourite bloggers, who is always bright and cheerful, was feeling terribly worried too at events she was witnessing in the United States. Sweet Melanie is always uplifting and this blog post I knew exactly how she was feeling or so I felt... Sweet Melanie.

Inspired by her I decided to make Angel Wings. Thanks Melanie! Suitable for anytime these are just lovely at Christmas as well.
I am using some on my tree and some as gifts. I am including my favourite angel verse

I love this verse as it shows angels can appear amongst us. My next favourite verse on angels is when Peter was in prison asleep and the angel woke him up... and led him to freedom.

In my family several of us (not me) have seen angels. Mum, Nan L and Chloe have and each has a story too long to tell here just now. And someone who influenced me when I was young had an experience... when she was a child she fell from a cliff on one of Adelaide's southern beaches. She was doomed. As she fell she felt hands "catch" her and when she landed at the bottom of this 8 meter cliff she was not hurt. Everyone was amazed. But she knew she had been caught and no person caught her. So gave her life to God then and credited her angel. And she did it in a serious way she became a Nun. So I have had four people in my life see or experience angels. (that I know of).

Well, the news and how Melanie was feeling were how I was feeling.
Then I went into the city and went to the book store I have been going to since I was a little girl. It is run by the Sisters of Saint Paul. Every time I go I am sure the same Sister is there.
As I started to browse a lady came in and she was talking to the Sister and obviously they knew each other. So I was browsing and this is a small shop so I tried to stay out of the way as I could tell they were talking and it was important and the lady started to cry. What followed will affect me for the rest of my life. In short the lady has family in Iraq and they are under threat of being executed for being Christians. They had been paying to stay in their house but had run out of money. The lady had come in for prayer. She put her head in the hands of this Sister and she was praying for her. I cannot remember the words but it was the most beautiful prayer and I was standing there helplessly and was overcome. I thought I was going to start sobbing. The ladies fear and grief were palpable. The Sister's love and calm ways were incredible and as she prayed tears were rolling done my face and I was praying too. I witnessed something that was a privilege and then later I talked to this Sister for sometime. Really I cannot adequately describe it. Each time I have talked about it I have had to stop as I start crying. I came home and started to tell my husband and had to tell him in instalments. Everyday I have thought of this family. I know I was meant to witness this. It changed how I feel about the current news and events... I walked out of that shop different to how I walked in.

Something that got me was how the Sister treated the persecution and murder of Christians as everyday event. Because they are. Her attitude was this is what we all face. This is what happens. This has been what has happened since Jesus was born. It is nothing new.

I simply drew a wing shape onto scrap cardboard and then flipped the shape so I had a pair of wings. One one side I covered the cardboard with sheet music. The other side I used white crepe paper streams and one row at a time I drew a line of craft glue and then pressed my crepe paper along the line and squished the paper together to form a ruffle. I have done this before along the bottom of cards and to make ruffle cards as I just love ruffles... 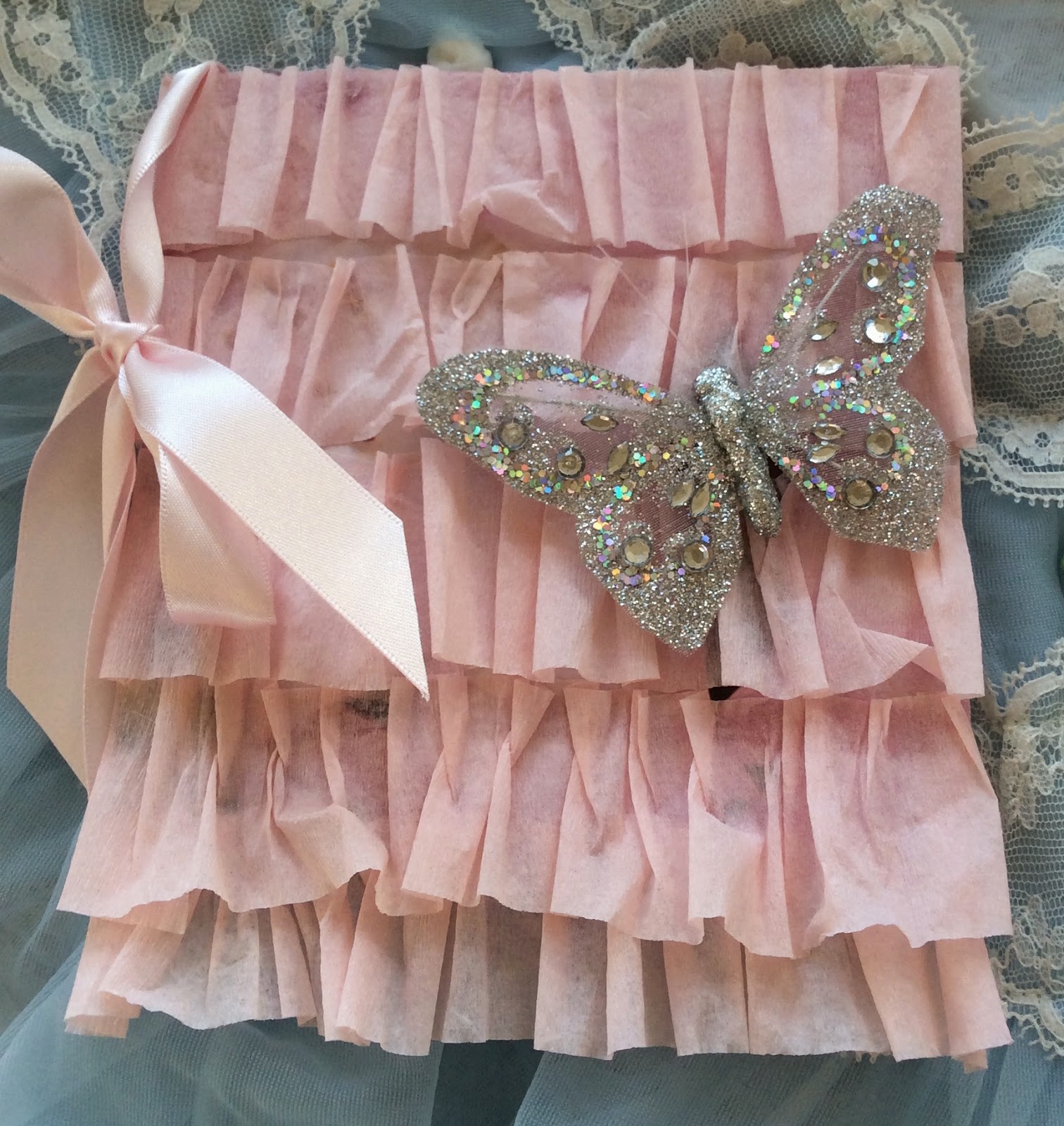 Normally I would just buy a roll of crepe paper and cut it into 3 cm strips but they had no white in paper and they did in streamers.

This is really easy to do after you have practised it on a scrap you will find you get on fine if you have enough glue for the paper to slide and work quite quickly before the glue dries at all. Do your row and then make your next line of glue so that this new row will overlap the last. It is messy. It pretty much wrecks your nails. I just accept this with glue projects!

At the top I secured with glue a loop to use as a hanger and covered this with the top layer of ruffles... 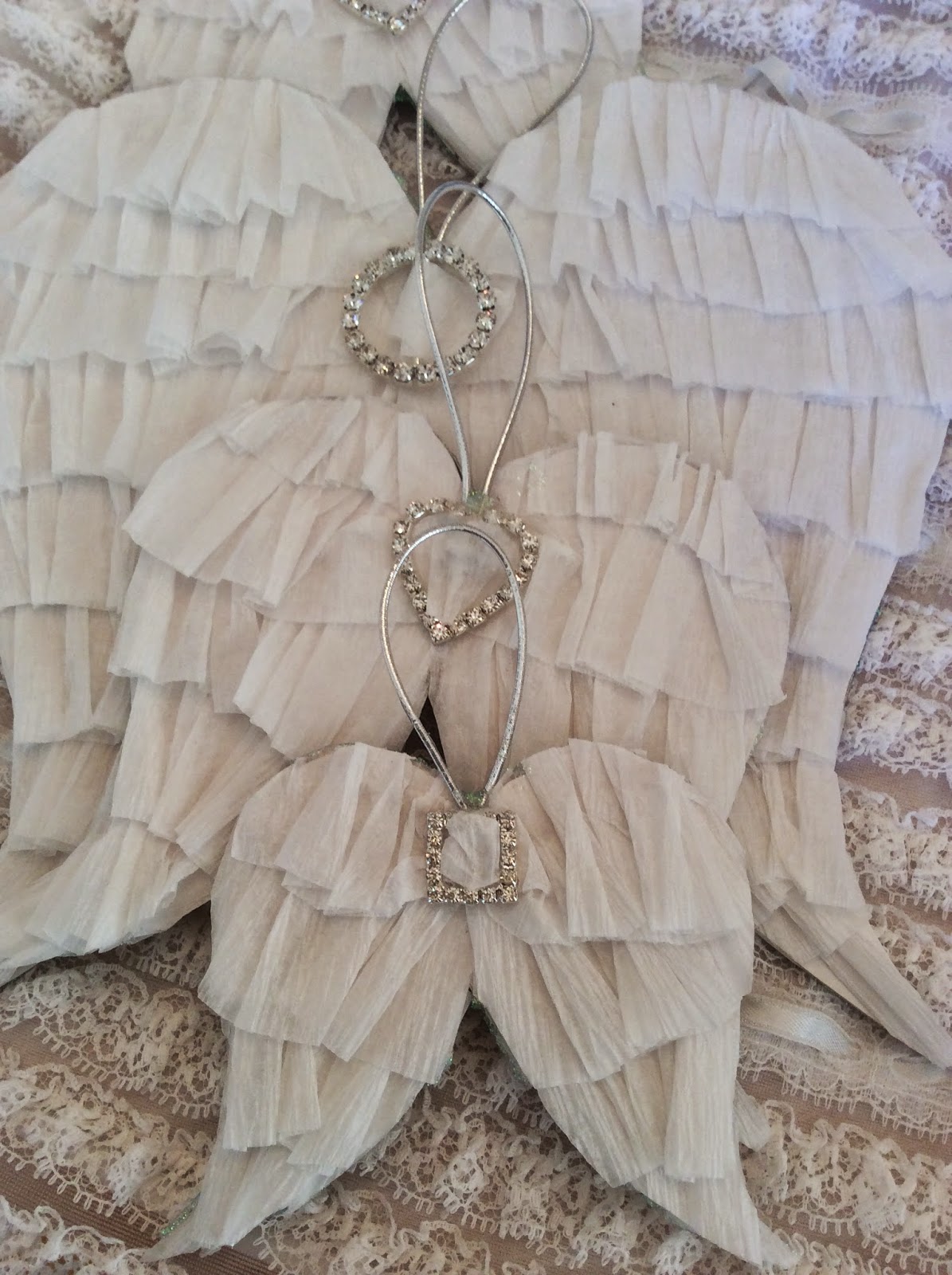 When I got to the row where the wings meet together I threaded the paper through a little buckle and glued that as a highlight. You could add a button or other sparkly feature if you wanted. At the end I trimmed around the edges as some of my ruffles were all over the place, I just trimmed and it revealed the wing shape nicely.

You could buy ruffle fabric and cover your wings with this. Online there are stores that just sell ruffled materials!

I made a few sizes. Some to fit in an envelope and use as a card by just writing on the back. I thought with those I will add glitter to the envelope.

All week I thought on what had happened and on Angels.

"The Angel of the Lord encamps around those who fear him, and delivers them" and
"For he will command his Angels concerning you and guard you in all your ways"

I have come to think that reminders of Angels are a good thing. And there were plenty of Angels involved in Christmas so this is going to be a strong theme for me this year, even more than usual.

I want things of beauty to look at and things that remind me to think beautiful thoughts. Angel wings are going to a few people I think might like them or need them somehow jus now.

Have a wonderful week!

Email ThisBlogThis!Share to TwitterShare to FacebookShare to Pinterest
Labels: Craft.