It was a big week!  My list was one of the longest ones of the year!   I love to see a long list forming on the fridge as I write down savings and good things.

I got on with a lot more work in the garden.  Lots of digging,  weeding and planting.  I added more tomatoes, zucchini, peppers, herbs and I got my pumpkins planted!  I am so excited to have a pumpkin patch. This is down in the orchard where there is heaps of room to spread around.

The fruit trees all look wonderful and covered in shoots and blossoms!  The fig tree is covered in tiny figs!

So.... it was a week of animals and adventures!

First of all Luke dropped by with two brown sheep to keep here as I want to start spinning the wool.    They are a lovely mid brown.  And they are both pregnant!    I would also love to get a black sheep but they are harder to come across.

THEN I had a call from my niece Allie.  She had been out and came home to a cardboard box near her back door.  She had no idea what it was.  To her complete surprise this is what was in the box... 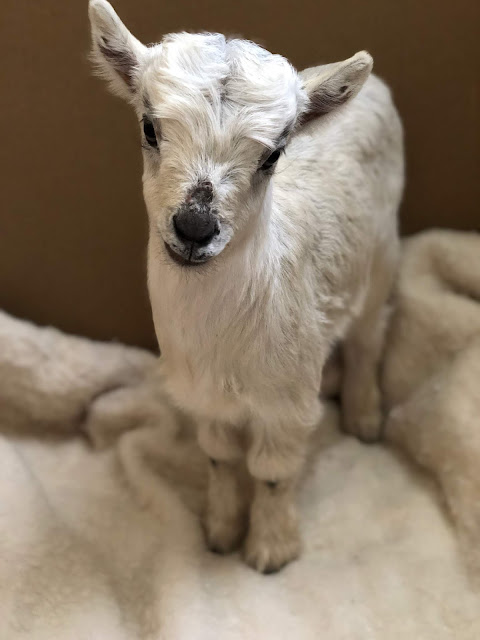 She had suspicions who might have left it but wasn't saying!  And she had no teats or feed.  So she rang me.  You can guess the rest.

It is a little boy and I named him Eddie.  (After Eddie Munster as he has a little weird thing going on with his forehead!)   He is so cute!  I quickly found out kids have the same formula as lambs and thanks to my animal pantry I had formula mixed up and in a bottle in a few minutes.  He drank his bottle right way.  I was worried as we had no information i.e. if he ever drank from the mother or how long it was since his last feed.  I just had to guess and do my best.  But so far so good. 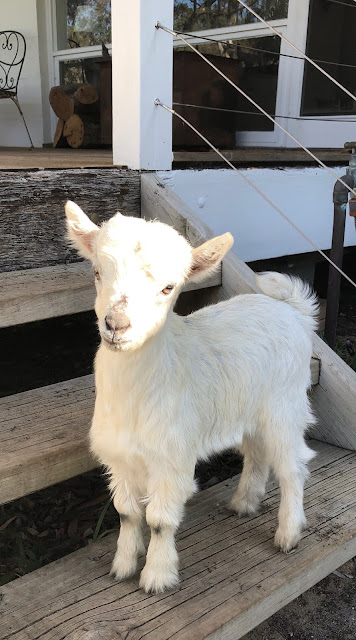 I love him!  Even "I hate goats" Andy has been seen playing with him and cuddling him.  And he wants to be cuddled. He presses his face into your neck and sighs deeply.

Eddie is on three bottles a day.  He is really tiny, it is hard to show how small he is!

I am publishing my post early as we are off to see the girls tomorrow and Eddie is coming.  They will love him and he won't miss his bottle this way.  So he is in for a big day out!

During the week I had left over bananas so I made another banana cake for Chloe and Luke.  I make them in a loaf pan for them so they are easy to slice and send in work lunches. Or to freeze. 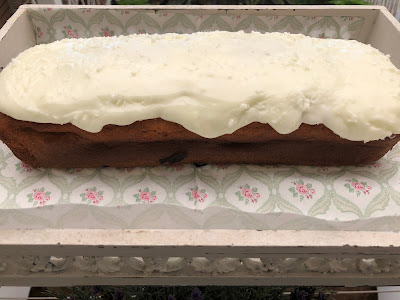 Next I get a phone call from Luke.  He says there is a calf if I want it... and to pick it up at the yards he is working at... about 15 minutes from me.  Once again you know what happens next!   I threw some newspapers into the back of my car and headed off.

Oh my goodness this is the tiniest calf ever!  I could even lift him.  The boys put him in the car for me. 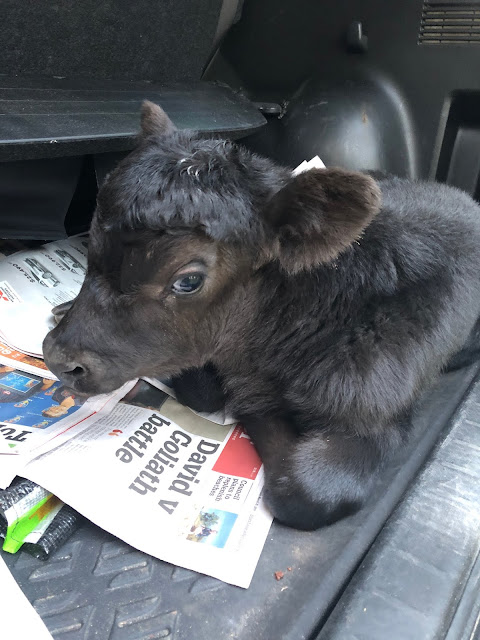 I know I could lift him because Andy wasn't at home so I backed up to the yard with Loui in it and lifted him out. I knew nothing  ti help me get started i.e. had he ever had colostrum?
With losing a calf last week very fresh in my mind I was very cautious.  Again, thanks to the animal pantry I had commercial colostrum formula on hand.  I made that up and gave it to him.   He drank it quite well.   The next morning I did the same.  This was after being terrified he would die overnight.  Then I introduced actual milk formula after almost 24 hours.  He was hard to feed and struggled a lot.
Now it is the end of day three and now he drinks his bottle like a little angel!
I named him George. So I have George and Loui.  But now it has become Georgie.
He is so cute. He cannot moo.  He tries to and a terrible noise comes out!

So mornings are a circus.  The first morning I heard this constant noise. In my half sleep I wondered is that a sheep or a cow?  It was Georgie's weird noise.  He was hungry!  I decided to feed him first, then Eddie, then Loui.  Everyone is hungry all at once.  Then Loui tried to muscle in and pinch Georgie's bottle.  So now I have a system so they are fed at one time.   I get breakfast after all of this!

As we are going to see the girls tomorrow I made a cake, of course!

This one is a carrot cake with cream cheese icing. 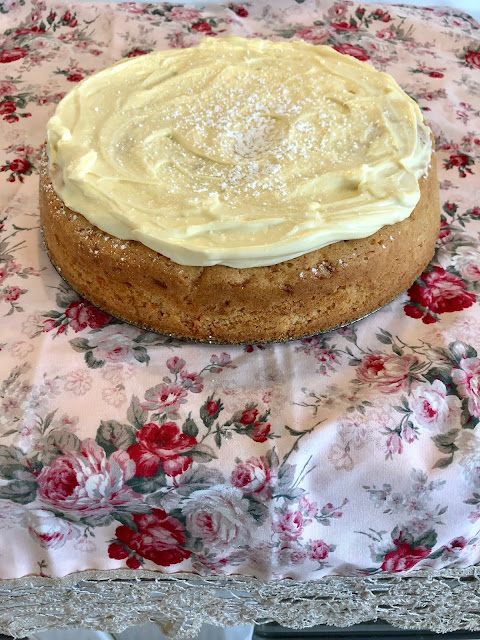 In latest developments both ewes have had lambs and they are both white!  (I would have liked brown but oh well!)

I planted over 200 sunflowers thanks to Clare who sent me her giant sunflower seeds!

Chloe gave me a lovely cardigan in a colour I love.

Early in the week I got eleven eggs setting a new record!

Yesterday I got twelve eggs!!  That has been the goal!

In the op shop I found 3 pure wool Onkaparinga (an old famous Australian brand) blankets.  All in perfect condition.  I snapped those up!

I saw bread on an amazing mark down and bought lots to freeze.

We had a couple of days of windy nasty weather.  I used those to get stuck into some spring cleaning. I steam cleaned the bathroom and took apart the top of the stove and cleaned everything.  It looks sparkling now!   There is lots of spring cleaning to do so if I get a chance I tackle something.  So I was pleased with these things getting done.

So that is my week!  Last Friday seems a longtime ago!

I hope it was a good week for you.  How did you build up your home, pantry, savings... did you find ways to get ahead and get things done?

In Australia it is Spring and it is a true case of "you reap what you sow."  If I don't get my garden planted I can't expect to sow!  So that is a priority!  Later when I hopefully am harvesting then making the most of it all becomes the priority. The seasons are wonderful and we need to do things according to the season we are in.  Like with many things there is a window of opportunity.  Many times I think "oh this is an opportunity!  Take it!"   I guess it is really just like my favourite saying "Make hay while the sun shines."   It is time to be prudent in all we do.  xxx