What a week! And today is the last day of September.

Thank you for all the comments and well wishes on Wednesday's post and via Facebook also. I usually reply properly to everyone but I think I have to give up as I am so far behind due to the storm and power outage. We came through it very well although overall our whole state didn't! More about that soon...

The first part of the week was pretty normal. Some of the ways I saved money and feathered my nest included:

I had repainted my dining room chars. I got these for $20 each years ago. I wanted them to look Shabby Chic but not too shabby... 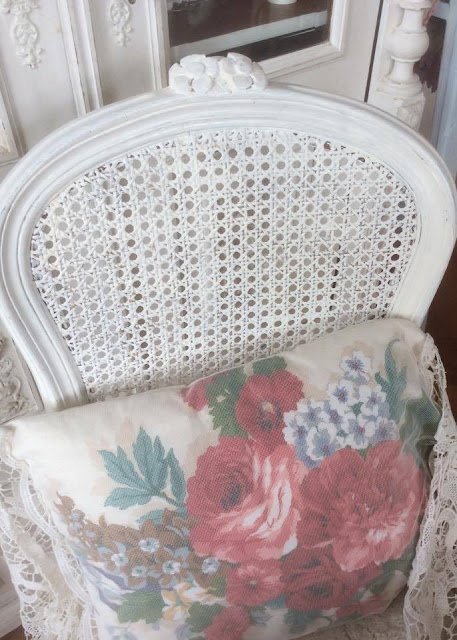 I made Quiches with sundried tomato, spinach, onion etc. After all this I guess they are not really Quiche exactly but they are nice anyway.  I made one for Chloe to take home too. 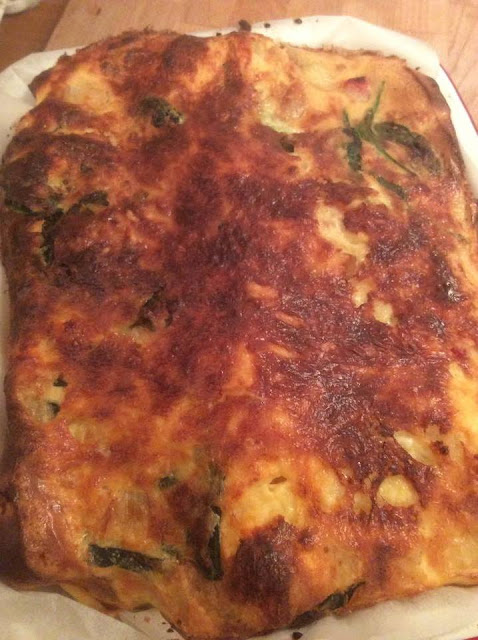 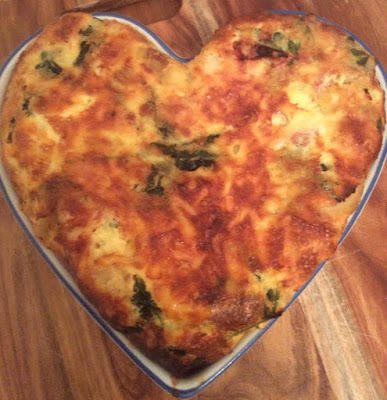 I got some Vanilla Essence started for Christmas gifts. This will all go into little labelled bottles and then into some hamper gifts when it is ready. It is really fun shaking it everyday and seeing it get darker! 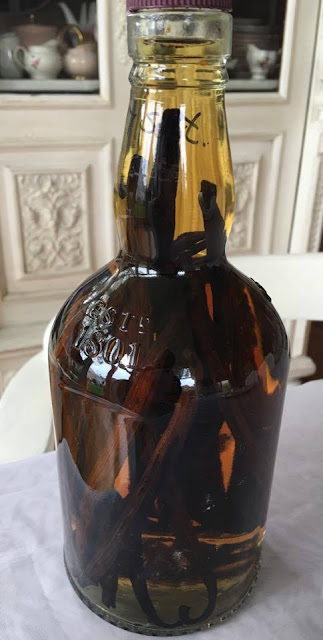 The next part of the week wasn't so normal!  We had warnings that a big storm was coming. Now the weather reports are not terribly reliable so I view them with one eyebrow raised mostly. However the warnings were coming. Lesson 1. Listen to the warnings!
Anyway I did listen and started warning the girls.

We have an action plan and this is the first time I really needed to use it. This was good and works if you get confused in a crisis. You consult the list!
We had more than 24 hours to get ready. So in that time Andy started up the generator, we checked fuel supplies, I filled prescriptions, shopped, washed and dried everything and so on.
The warnings then intensified.

The morning the storm was meant to hit I got out torches, candles etc plus tarps, plastic sheeting, making tape and so on. We were warned of very high winds and there is a big tree out the back...
As it got closer I used electricity for everything I could think of and boiled the kettle several times and filled a big thermo with coffee and another with tea.
All this time I had my phone changing  plus iPad etc all fully charged. I messaged everyone to do the same.
I warmed up the house as much as I could and got out the battery operated radio.

Then the storm hit! Andy was working and still out on the streets.
One worry was it is only two weeks since we had flooding around here and the ground is already soaked. So rivers and creeks were going to flood faster this time.
The power went out soon after the storm hit.
The WHOLE state lost all power. That is, size wise, for the US ladies... about the size of Texas plus the size of Kansas combined. No one had power.  I don't know of this ever happening before.

I thought of Patsy as she has been running scenarios where you think of what you would do in various situations and plan your preparedness steps. Well, this was a real life one! I was about to test the preparedness we have been working on for almost two years now!

Unbelievably just at the worst moment Andy's van broke down and he was stuck. Luckily this happened before a huge number of people were stranded later and he got help quite quickly. However he got home later without the car which went to the workshop. And as we found out as the evening went on some of our emergency supplies are in the van!

We did some things right and some things wrong. So we learned a heap.
The biggest thing  we did right was we knew our power supply is not reliable and we bought a generator. It was wonderful. It worked so well for us!

Here's some of what we did wrong:
We expected our power outages to be in the summer if there's a heatwave. Thats when our state uses maximum power which we don't believe they will have. So we are more summer outage prepared than winter and it is wintery now even though we are in spring!

I had spare torches and lanterns that were new. They needed to be opened and started and two of them were painful with tiny instructions and one had screws and you had to take out the batteries and put them back in to make it work! All really annoying in a crisis so open things, read instructions and practice everything while you have time, light etc and avoid these aggravations!

What we did right:
We had plenty of light and  no worries about running out of things. We would be ok for weeks.
We had a lovely dinner cooked on the BBQ. It was crumbed chicken with carrots,  asparagus and garlic butter.
While that cooked we had a big pot of water also on the BBQ.
That was poured into a big tub I bought and keep in the cellar. Its kind of the size of a baby bath.  Andy poured the hot water into it (I sat it inside the big bath) and I added a little bit of cold. I stood in that and gave myself a pretty good "shower" and wash. It was really good. I felt clean and happy. We repeated the process for Andy. After a long day that was much nicer than no shower!

We ran the generator for a couple of hours. We watched the TV updates and news and ran the fridge and freezer for a while.

Otherwise we listened to the battery radio. The station we listened to was wonderful. They helped everyone so much with updates, advice, calming words. At one point I felt that a battery radio is one of the most important things you can have in a crisis. We knew what was going on and what to do.

Overall we were fine.  We stayed dry and safe and off the road. We ate hot food and had coffee and tea until midnight from the thermos.

What I learned: (So much!)
Firstly within the first hour or two candles, matches, torches etc had sold out across the state  And stores closed early. People were yelling at supermarket staff desperate for these things.
I think if people are yelling and desperate after two hours how would they be after two days or two weeks?
Patsy said this too. She was affected by the fuel shortage in the south of USA. The gas stations had no fuel. After only one or two days people were very upset and abusive. This is scary. It makes you wonder how long it would take for things to become violent. 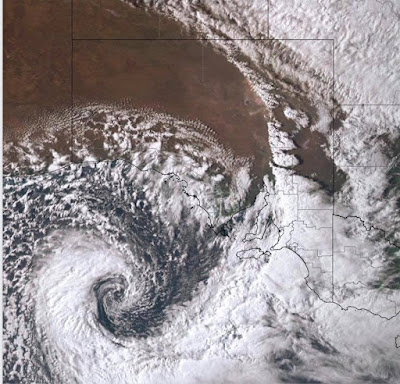 Public transport failed. Our trains are electric with no backup!
Phones failed. Mobile phone towers use electricity and have LIMITED back up then they don't work!
Many hospitals had no power! Who knew you need to take a torch to hospital (let alone the more serious ramifications of that...) In one hospital people on respirators etc had to be hand ventilated.
Roads were blocked. Fuel doesn't pump so people who needed petrol/gas couldn't get any...
Plus boom gates across railway crossings got stuck down and traffic lights all were out. The roads were very dangerous. You do not want to be on the road in a mass power outage. Avoid it at all costs!
WORSE you do not want to be out when a big storm hits.  People were stuck in elevators in department stores! EEK! (my worst nightmare!)
Shops just shut their doors once the power went off.
000 (the same as 911 in the US) stopped working. Guess what? It has limited back up power then doesn't work. (Impressive)
At this point... when roads are blocked, the phones are out, 000 doest work anyway etc you are on your own. If you could call for help it isn't coming anyway.
If you are not prepared you are crazy.
Last year I posted a weekly series on getting prepared. And I worked week by week on our own preparations plus all this year I have tried to keep building on it and our skills as well.
This crisis was small really and short i.e. the worst was over in three days.
I have a list of things I need to add to what we have. One thing is an electric hotplate or electric frypan.

Yesterday afternoon things had calmed down and I went to the store nearby. It is less than 1 kilometre away.  The stores shelves were empty in every section to do with power loss...
Here are the matches: 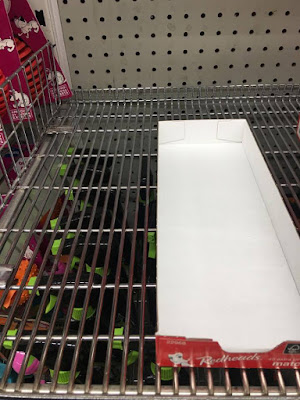 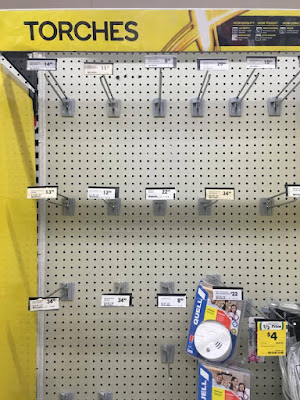 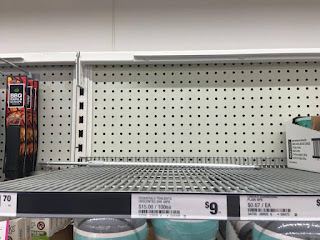 People were asking staff if there were any out the back? (we all know the answer to that!)
And when would they be coming in? (The answer was they had no clue)

You cannot buy these things when you need them. You must have them ready at home.

It's a wake up call and a good lesson.
The girls were ok. Chloe found out she needs cast iron cookware for the fireplace.
Lucy cooked risotto on the BBQ which I thought was pretty good since I find Risotto daunting in the best of circumstance!

The weather is still very rough. I am treating this as a real life test of our preparedness and basically it has shown me that we need to keep going with this as boy do we ever depend on electricity a lot!

Next year I think I will go back to a weekly preparedness post.

To not be prepared when a crisis hits must be absolutely terrible. Get prepared as much as you possibly can.

Before the wheels fell off this is what I did towards my 100 day challenge:

Friday I cleaned and painted inside and around a window.
Saturday I cleaned under big cupboards that don't get moved.
Sunday I washed down a gate and fence ready to paint. I cleaned the fronts of my kitchen cupboards and sanded a door frame.
Monday I started painting a fence.
Tuesday I touched up paint in the kitchen.

And you know the rest!

How did you build up your nest this week?  I hope it was a good week for you!

Tomorrow I have a special post that I hope is going to help us all fill our pantries, gift stashes and
cleaning cupboards using very basic and inexpensive things along with stuff that we normally throw away!  I thought I was good at not wasting things but it turns out I have been terrible at it!