Pantries and Preparedness, Victory in the veggie garden.

As the weeks pass by we are all noticing different shortages or items that are either limited/rationed or not on the shelves at all.  Not much has changed at our local supermarkets, the same things apply with limits of one or two items in so many categories.  But now the limits and hard to get items have extended to the plant nursery.   I found this at our local nursery and they said three companies that supply them say they will have no seeds for the rest of the year and the fourth company doesn't even answer the phone anymore.    And seedlings were not much better.  I placed my name on a waiting list however and this led to some success!   Like finding  flour I was over the moon excited to get seedlings! 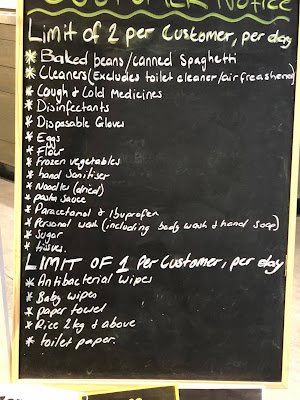 Now we have many seed savers in the group (and too many to mention) but SewingCreations and Jane have both inspired me to save seeds.  And when you have gardening friends seeds are a good gift!  Like soap and face masks seeds are now worth more than gold!

Many things will grow from a cutting, some things propagate themselves.  I once had a Lavender bush that had babies come up all around it year after year.  I dug them up and potted them continually!   So now we can think of ways to get some food growing in any way we can.

Vicky and I were talking about how to creatively get around the seed issue and she wrote....


Food shortages, seed shortages and basic supplies being hard to find or sold out before we get to them makes it stressful right now, but again if we look at what we have on hand or even what someone else may be tossing we may just be able to eek along and add to our pantry or meal table or save a little when prices are increasing. In lean times even just a handful of this or that can be so satisfying. From just adding a bit of flavor to possibly becoming an actual harvest it really is time to take a second look at things.
I have heard that some places are having seed shortages right now. If you have bought produce then you more than likely have a resource right at your fingertips you can use. Most have seeds in them or can be regrown easily. Instead of tossing them out consider saving the seeds and drying them until it's time for you to start them or if it's time to plant in your area get them sprouting to plant. After having talks with the produce managers at the stores I have found that many of the veggies I buy are actually heirloom, but not advertised as such. For example California Wonder peppers which most stores sell here are actually an heirloom veggie. I have started many things from store bought veggies just to see what they would be and I have not so far had any that didn't produce something. And something is better than nothing.
Celery and lettuce root ends will continue to grow and produce new, onions and potatoes, garlic and carrot tops that sprout can be planted to regrow. Just don't hurry them along.
Dried beans from store bought bags I've planted before by soaking them overnight first. You need to look at the bag though to see if it says irradiated. That is done so they will not sprout. Bags of sprouty beans on a store shelf wouldn't be wonderful.
And the beauty of this is other than some time we are out nothing really. Looking at food differently helps too. Someone else may look and see a few small potatoes that grew I look and see what I can actually make with those few small potatoes! It is all a matter of perspective.
I am currently starting celery which I will put in pots in a few weeks. I have tomatoes starting from a store bought tomato that wasn't good when the hubby brought it home, onions that are sprouting which I will trim and plant and potatoes that are sprouting.
So don't get discouraged use what you may have on hand or can get someone to save for you this is another example of using our resources to our advantage!
XOXO
Vicky 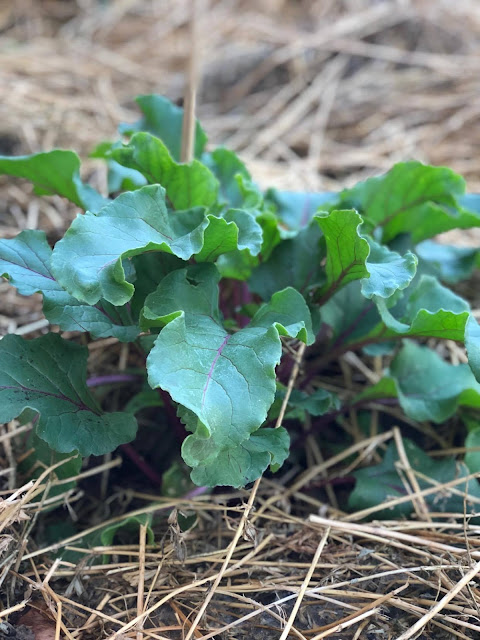 We have all had plants come up when we didn't expect them too, especially if you put things in the compost or garden.   This does prove many store bought veggies and herbs do still produce viable seeds.   I certainly have had tomatoes grow and produce this way.     I now save any sprouting potatoes and plant them.  Suddenly I look at everything for potential!

My own garden right now is pretty much starting over.  I did get a lot of tomatoes, spinach, parsley, zucchini and basil over summer.  But things are quiet now and I am rebuilding.

My make shift fence to keep the dog out is so far working! 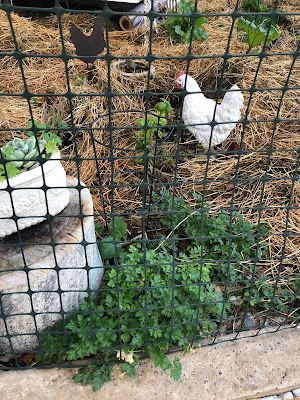 I have some things on my side... access to sheep and chicken poo,  good water (we have a bore)  a fairly sheltered spot that is protected from the wind,  space for other gardens if I want to extend...   this space gave me somewhere I could just let pumpkins sprawl everywhere and I am so happy I planted them! 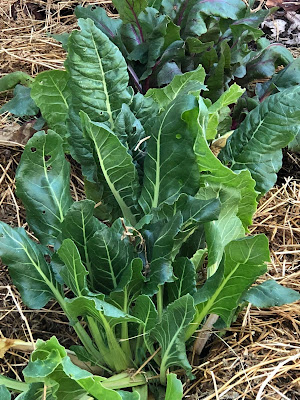 We have only been here a year and a half.  It seems like much longer!   So everything with the garden is trial and error.   I would dearly love to add some raised garden beds.

I am admiring how many people share garden spaces or have an allotment like in England where you garden a patch in a big garden,  I presume you rent or lease this plot.   And the good use of space in a tiny garden where everything is growing upwards.   Up is the way to go when space is short.    I have been reading how in the war years and depression people formed clubs.   There were things like chicken clubs and pig clubs... where one person might house them on their property but the feeding and caring for them was a group task... at the end the produce was shared.   We have had a lesser version of this when others saved their household scraps for our chickens and we return the favour with fresh eggs.
Two families could agree that one will raise chickens and another will garden and eggs will be swapped for veggies.  We don't have to do everything we need some things that we can produce to be self sufficient in and able to sell or barter with.  Something is better than nothing!   Because of this I grow a lot of the things that grow well.  I had about thirty feet of lush Parsley and none was wasted.  I was able to use, dry, give away bunches and feed chickens, cows and sheep with it.   Then I harvested the seeds and packaged them.  I got so much from it!   So now I have a huge amount planted again and it is just coming up.

I want to do more and I want to do better.  If you have suggestions for how to multiply and propagate, save seeds, grow from cuttings and any tips at all please share them!   There is so much to learn.   One of my newer discoveries is how in Europe many use all kinds of things to fill a raised garden bed... including fallen logs.  They will after all break down eventually.   What a saving this would be!   You do not need to purchase heaps of expensive soil as most of your garden beds can be filled with found and salvaged things.  If this is interesting to you look up Hugelkultur method for raised beds.  Amazing!  One thing we have is plenty of fallen logs!
Another is to look at potential containers for raised beds.   I have my eye on some large wooden boxes that the farm has had pumps arrive in... they look like garden beds to me!

Each year Vicky calls her garden The Victory Garden.  So then her pantry became Vicky's Victory Pantry.   I love this!   The less we depend on the store the more victorious I feel.
My niece has been here cleaning our gutters.... now I have some more compost material for the garden!  So I am off to spread this around and water my seedlings.xxx