It was a really big week!  The best part was we headed down to the farm for the weekend to celebrate Dad's 80th Birthday.  It was a lovely weekend! The whole family gathered and we had a big birthday dinner on Saturday night.
Years ago Dad nearly died before he turned 60 and I remember that birthday so well. And here we are twenty years later.  When he turned 60 he was given five years to live by the way!

Some of the best fun was seeing Harper with the farm animals. She had cows lambs, ducks, chooks, puppies and others to pat! 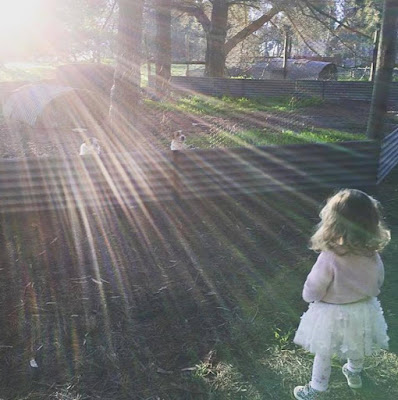 It was so nice I could talk about it for a week! 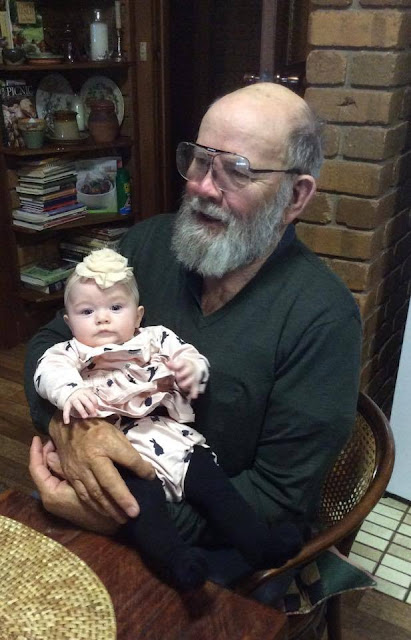 On the way down to the farm we stopped at an op shop and on the way home another one.  Andy got a beautiful fine pure wool grey knitted vest which he just loves (for $2.50) and a heap of books.  I found beads,  a top, and pumpkins that just came in from a local farm. And lemons! 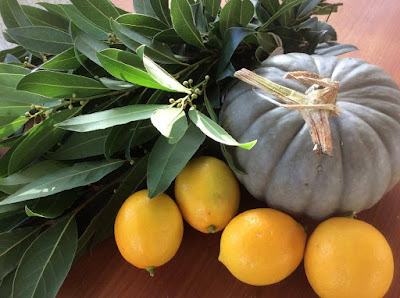 At the farm I also picked Bay Leaves and Mum sent us home with venison as well.

Chloe lives nearby and we drove over to her house for an afternoon. We arrived to fresh baked biscuits and cups of tea. 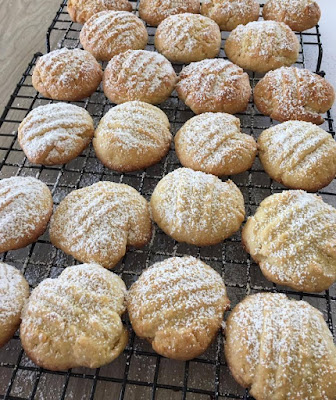 Each day was sunny and beautiful.  We saw hundreds of cockatoos, water birds, Blue Wrens and Rosellas... and so many more.

It was like a little holiday and I took heaps of photos around the farm. 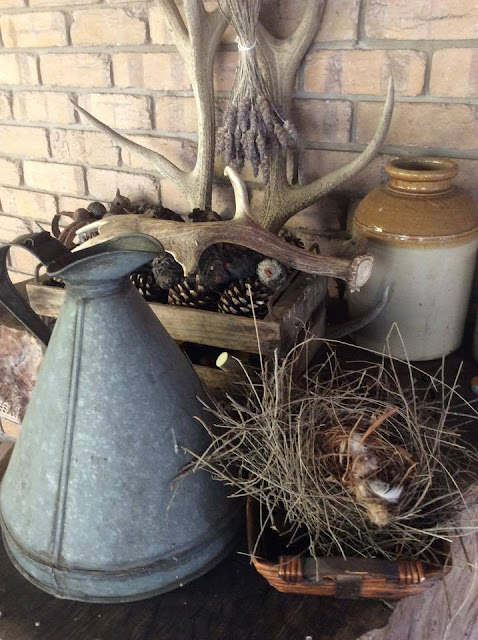 I had my eye on that bird nest!

And there are various spots with wood ready for the fire place.  There is always a big fire going. 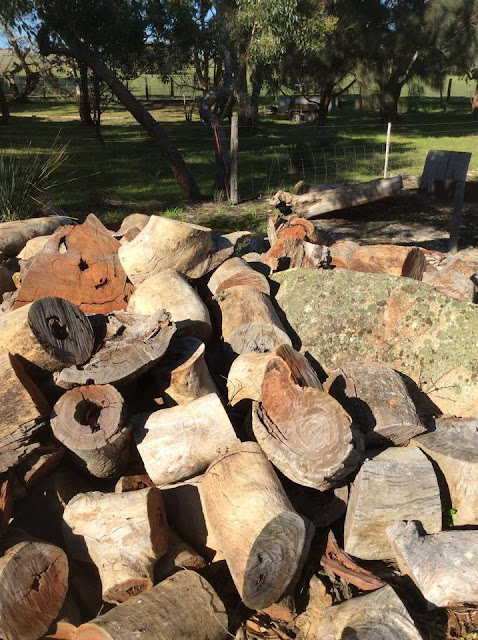 A while back I posted about the farm and showed a bit about the kitchen and Dad's old stove and things which is here.

Most of Mum's garden is native flowers.  There was a gum tree just covered in pink! 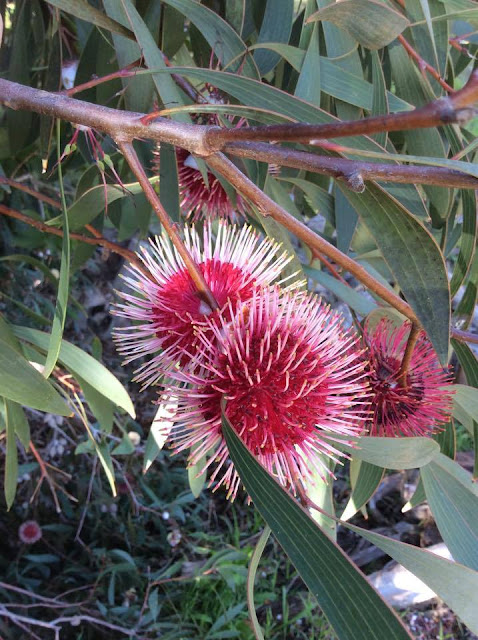 During the week we had good news and bad news.  The good news is that it looks like insurance will cover new floors in the kitchen and lounge/dining area. The insurance floor guy came on Tuesday and said "yep, that's stuffed"  confirming our suspicions!  There is someone else coming yet and hopefully they can go ahead and get this done.

The bad news was the job that promised Andy 30 hours a week hasn't delivered.  They had him at conferences and appointments but haven't delivered work.  It's been weeks. We can't afford to wait around really.  Luckily he has had private work to keep him going so far.  But it is nerve wracking.   With this and floors that look HORRIBLE I thought of "do the next thing" and just kept doing what needed doing.  Ages ago I wrote about this quote that I learned from Elizabeth Elliot.  It has helped me so much so many times.  Do the next thing.

During the week some of my money saving efforts included making two big pots of Chicken Soup. First I made the stock then I added everything else.  I think I made almost 15 litres of soup!  One lot went to Lucy's house as they have had colds.  Lots was frozen for days when Chicken soup is needed. 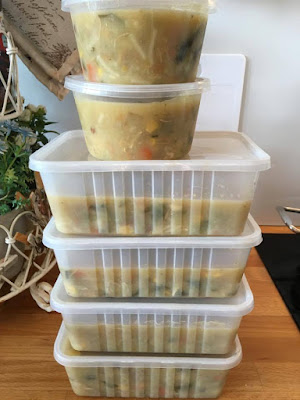 I made two trays of ham and cheese scrolls.  This was meant to go with the soup and provide lunches.

The scroll recipe is just the same as my bread recipe, rolled out and filled.  All the Sour Dough recipes can be found via the index on my side bar. 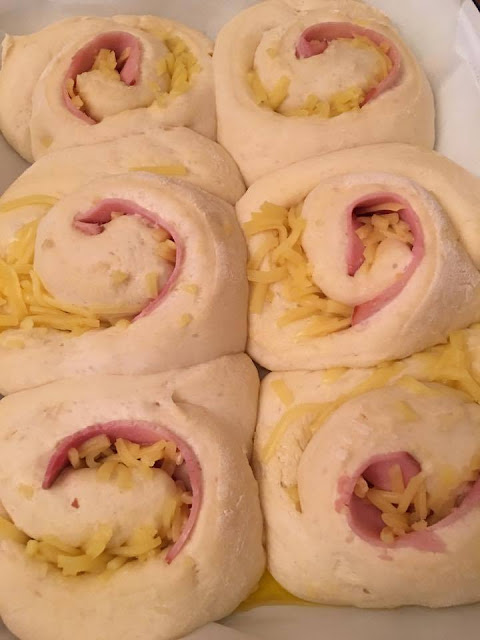 As far as I can see anything you might put on a pizza is good in scrolls! 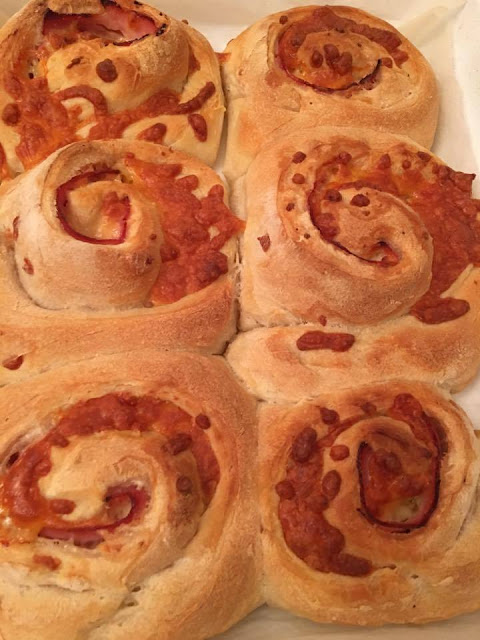 Then I had another go at making Raisin Bread.  This time I added a lot more fruit.  Success! It is beautiful. I think there might be a bit of difference between Australian Raisin Bread/toast and the US.

My recipe ended up being my couple of cups of starter made into a sponge with a cup of water and a cup of flour. Once that was bubbling like mad I added:

I kneaded everything but added the fruit near the end (in the mixer) and then the mix was too sticky so I gradually added more flour until it was a nice soft dough that held together.

This made two loaves.  After the first rise I divided it in two, placed in my pans and let rise a couple of hours in a pre warmed oven that I turned off. I was really cold here!  They were beautiful!  I baked in pre heated oven for 20 mins. 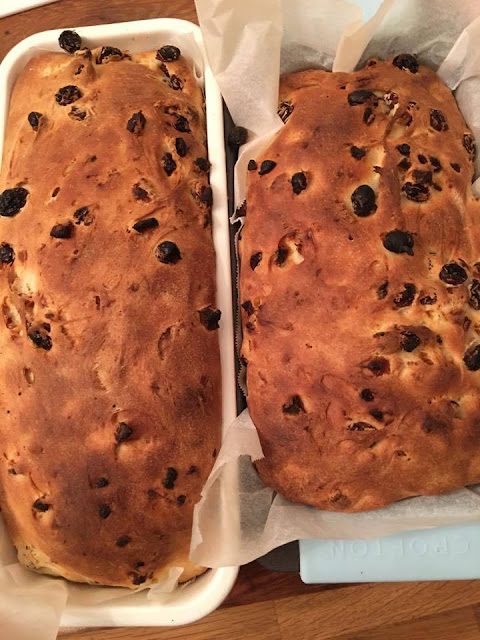 They are all sliced up now and most is frozen.  At a cafe last week I saw this for $4.50 per slice!  It is less than that to make a whole loaf!  It is so yummy toasted.  Now I have it to our taste it will be a regular.  Alter the fruit, sweetness, spices to your own taste.

I trimmed my own hair,
Froze a bag full of celery tops,
Pruned all the roses out the front of the house,
Mended a pair of my jeans,
And I took advantage of a half price sale on some vitamins we buy.  To my surprise with this I was given a whole bag of free stuff! 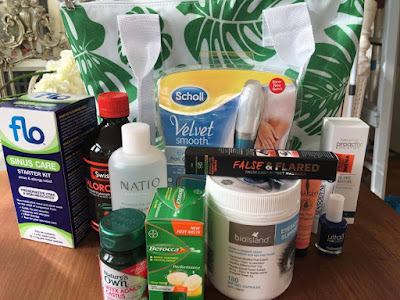 The best things for me were a moisturiser and a good mascara, also some vitamins. There are a few things to give the girls and one item to go into the present cupboard.

So that is my week!  I need to have a quiet moment to work out my Vicky Challenge total.  It should be good.

Lucy has started a blog!  It will suit the young Mum's with little ones.  You can see some of my ways have rubbed off on her 😊  It is here The Pitter Patter of Tiny Feet.  All encouragement is welcome! She is right where I remember being so well with two little girls just like me!

How did you build up your nest this week?  I hope there were some ways to get ahead, save and feather your nest generally!