It has been another busy week!  I guess maybe I should accept this as the new normal.  My fitness has increased I have to say as daily I end up pushing the wheel barrow around full of hay/manure/wood/  dirt... something!

First of all Mum, Chloe and I headed off to see the girls for Harper's birthday.  It was a wonderful day.  Mum made Harper the most gorgeous gift.  If you remember the girls had a tiny lamb which was so small it was carried around in a bag.... 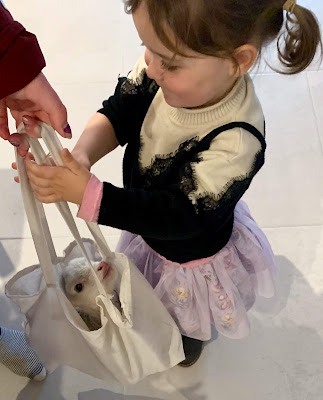 Mum made Harper her own Lamb in a bag! 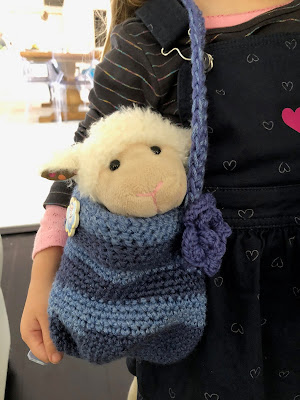 It was such a hit.  Lambie had to go everywhere and face the front so he could see.  😍 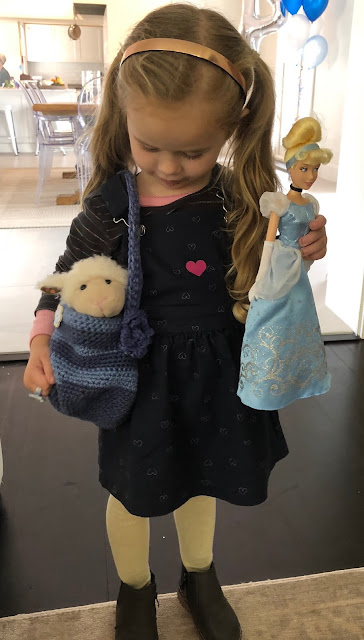 It was just a lovely day.  As usual I took cooking and came home with spinach for the chickens.

Then we had Mothers Day.  Chloe put on a beautiful afternoon tea.  I contributed gluten free scones... 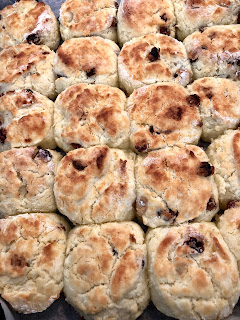 And a gluten free sultana cake.  (The second one was for freezing.) 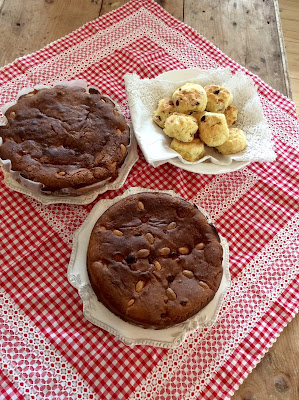 This little tablecloth was 50c in a new op shop I found.  It is in a little town we pass through on the way to see the girls.  I also found sewing cottons for 20c a reel and lovely bird book.  I seemed to have lots and the total was $2.70!  So this stop will become a regular part of the trip!

We have only two weeks until winter.  So far it hasn't been very cold but in the night I can see there is a carpet of fog outside and this is how it was almost until lunch time one day this week! 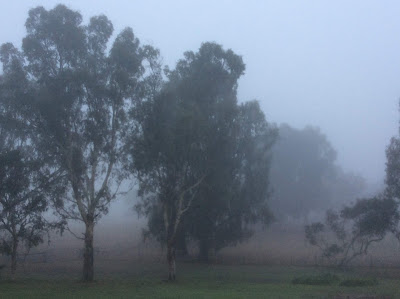 This cleared and it was a beautiful perfectly sunny day.

After lots of interruptions I worked on my blanket and think I am starting to get somewhere. 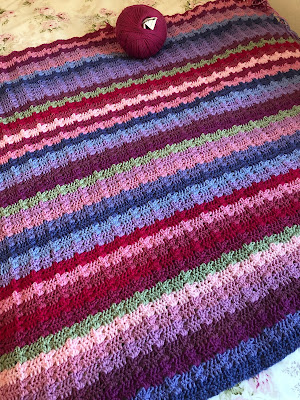 I made pumpkin soup with a zucchini thrown in, a venison roast, chocolate fudge for the son in laws, baked rice custard (to use up some eggs) and sausage rolls, both gluten free and regular. 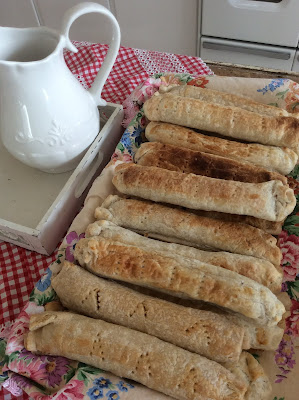 I had some left over pastry so a couple of nights later I made pasties.  Now this was interesting.  I just started to cook the veggies and mince (ground beef) for the pasties.  I was kind of running late that day as we had been burning a big bonfire outside.   I had onions browning and it was getting dark outside.  I must have been making a racket in the kitchen as I didn't hear anything but Andy came in and said "there is a man outside to see you."   I turned off the stove and went outside... there were two guys and they explained they had something in the truck for me from my Dad. mmm
This is what was in the back... 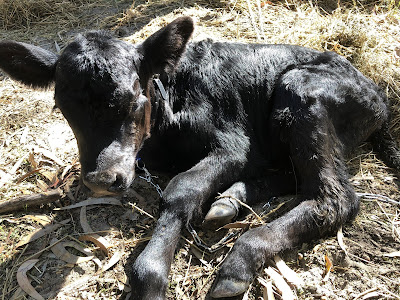 It is a girl and we named her Lattie after one of the mens wife.  I thought I would call her after the man who delivered her but his name was Glen.  Not wanting to offend any Glen's but it is not a good girls name.  So I asked him what his wife's name and he said everyone calls her Lattie.  She Lattie she is!  He seemed quite pleased about this!
Truthfully I don't know if the calf with survive.  But I am doing my level best.  The next hour and a half we found a safe place for her overnight,  mixed up formula, got her fed for the first time after finding a suitable bottle.  I have on hand teats and formula knowing this was a possibility. So thankful I did decide to stock these things.   There was debate over her age and if she had a drink from the Mother ... the guys thought so then Dad told me no she never had a drink the Mother had died.  So I made a homemade colostrum and hoped. 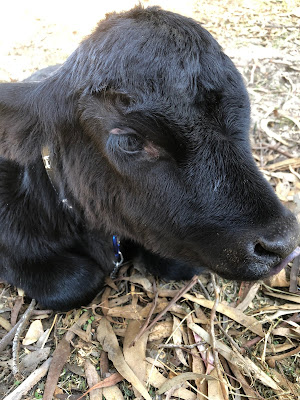 At first she was a handful and we had our work cut out.  After several bottles she is docile and comes to me.  Her first bottle was a battle.  Now she sees the bottle and comes and drinks.   But I am still not sure if she will be ok.  When they never got colostrum the odds are lower.  But I am trying my heart out!

Eventually that night I finished the pasties and cleaned up the kitchen and it was midnight when I checked Lattie and Scooter and went to bed.  I did ring Dad also and say "thanks for the present Dad" and he laughed.  The men who delivered her had been working at the farm and going home right past our place.  So he asked them to drop the calf off.  He thought it was a good idea for it to be surprise. lol

Yesterday we went up to the hay shed and got a load of hay and made Lattie a little home all warm and sheltered.  She has a perfect little paddock next to our house and her own little home.  That is the thing about this place... I have had little yards and sheds and known one day I will fill them...

Today I am heading into a town north of us to meet a friend and Tuesday Afternoon Club member.  I have not seen Wendy in many years.  Fifteen? She found me some lovely old jars.  I am taking her some fresh eggs as she is a wonderful cook.   I get to check out a different op shop too!
Plus it is a gorgeous day!  The sun is shining and just a lovely end of Autumn Friday.

So that was my week!  Never boring around here.

(This morning I fed Lattie his whole 2 litre bottle. He came to me nicely and just drank from the bottle like a good baby.  A good BIG baby!)